Currency is the perfect canvas to widely circulate imagery. All over the world, banknotes illustrate national heritage and culture to be carried and changed hands for potentially generations to come. Important people of history, political ideologies, national treasures, landmarks or flora and fauna are all commonly inked on banknotes. Much can be learned of a nation’s contemporary values and ideals and North Korea is no different!

In this blog post, we explore North Korea’s current circulation banknotes and what they tell us about the country.

Every banknote includes the North Korean Coat of Arms in the top left corner. The emblem features the five-pointed red star, widely used to symbolize socialism. The star gleams over Mt. Paektu (Korea’s most sacred mountain) and a hydroelectric dam representative of prosperity and self-sustainability. Crop harvests of rice (‘golden soil’) enclose the emblem. Draped in a red ribbon are the words ‘Democratic People’s Republic of Korea’. 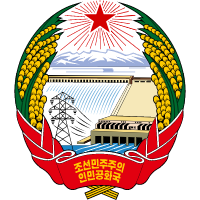 The current series of banknotes first circulated in 2009 when North Korea underwent a currency reform. The notes featured in this post are special edition ‘Juche 100’ commemorative prints of this series, released in 2012. North Korea uses the ‘Juche’ calendar which pivots off the birth year of President Kim Il Sung (1912, or Juche 1). This reprint is therefore in celebration of the Eternal President’s 100th birthday. The text ‘Great Leader Comrade Kim Il Sung’s 100th Birthday’ is stamped below the coat of arms. 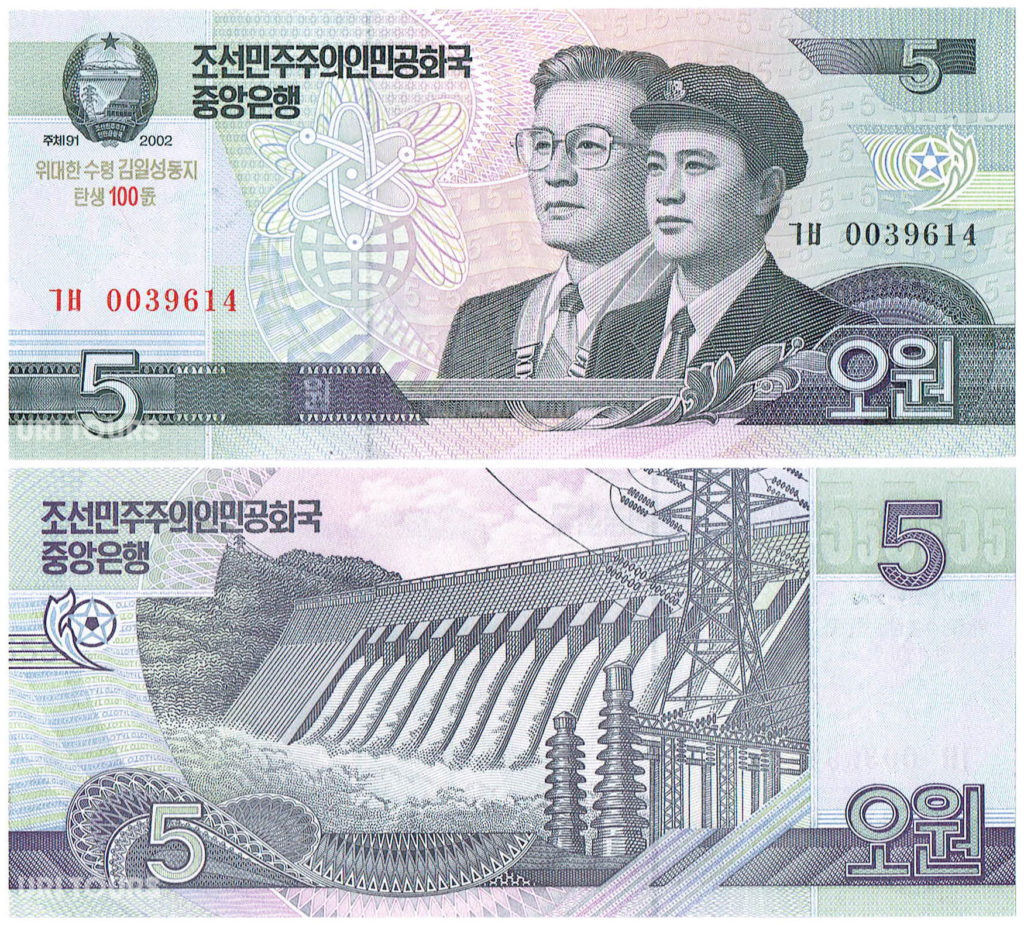 Front: Members of the Workers’ Party of Korea (WPK). The WPK is the founding and ruling political party of North Korea. North Korea’s current Supreme Leader, Kim Jong Un, is the Chairman of the WPK. The guiding ideology of the WPK is the Juche ideology which was developed by Kim Il Sung and is often simplified as ‘self-reliance’, that the people are the masters of their own destiny.

Back: Hwanggang Hydroelectric Dam. This dam is located not far from the Korean Demilitarized Zone. It’s estimated that over half of North Korea’s electricity is generated by hydroelectric plants. Hydroelectric dams are historically important, featuring on the North’s Coat of Arms since 1948 and representative of current and future prosperity. 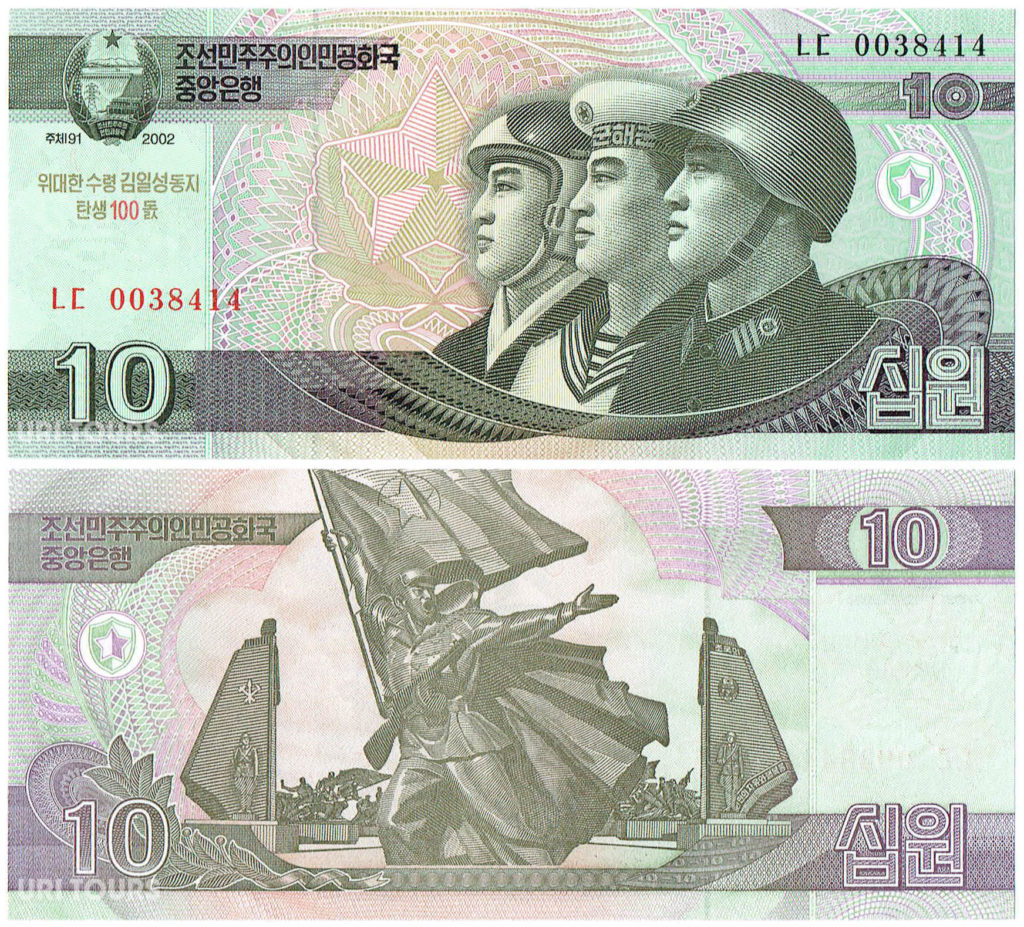 Front: Servicemen of the Korean People’s Army representing the Air Force, Navy and Ground Forces. North Korea has the fourth-largest active military force on earth. The military plays a large role in North Korean society, in the mid-1990s Kim Jong Il reinforced ‘Songun’ (military-first) policy as a guiding policy of the state. Songun policy prioritises the Korean People’s Army in the affairs of state and allocation of resources. Juche and Songun remain the guiding ideologies directing North Korea’s political, economic and foreign policies.

Back: Monument to Victorious War. You’ll see this on most of our group tours when visiting the Victorious Fatherland Liberation War Museum in Pyongyang. This museum is an elaborate and detailed exhibit of the Korean people’s fight against foreign invaders, with a focus on the Korean War (locally known as the Great Fatherland Liberation War). The museum and monument reflect the official North Korean government’s viewpoint of victory in the Korean War. The Korean Armistice Agreement was signed on July 27th, 1953, and this date has since become an annual national holiday in North Korea, known as Victory Day. 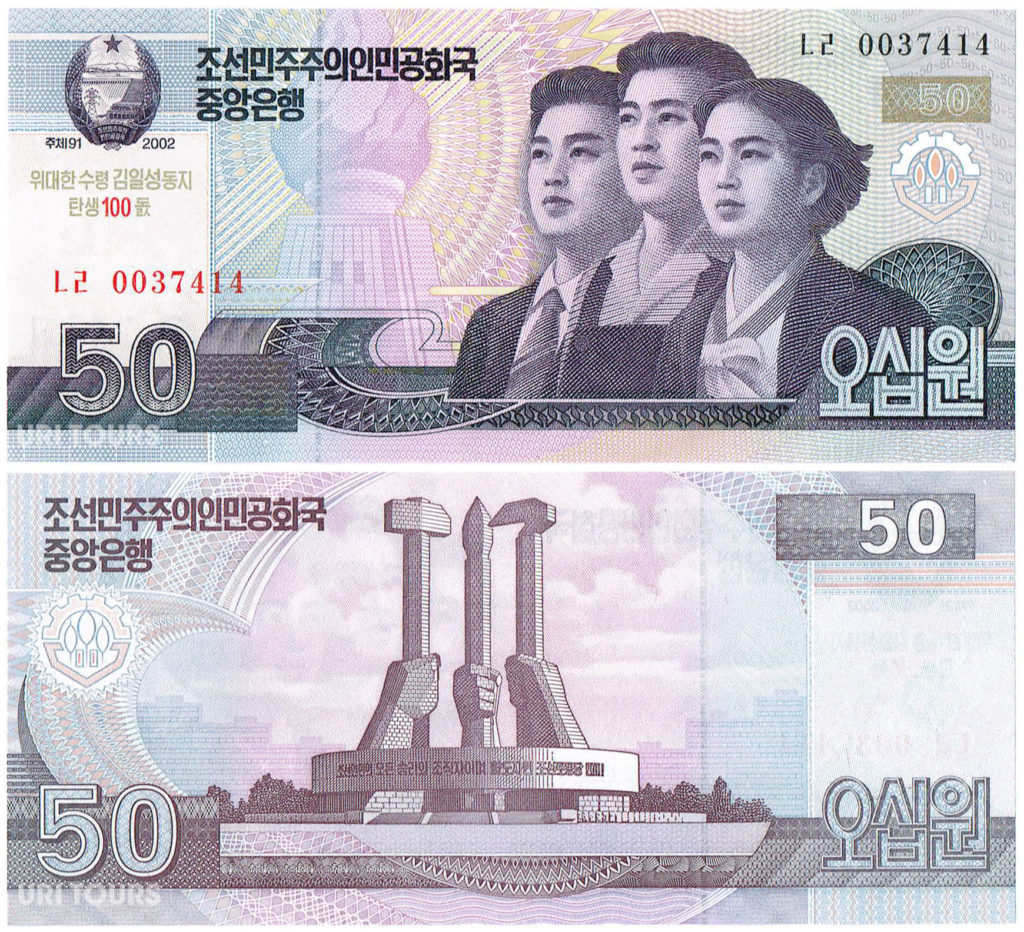 Front: The intellectual, laborer, and farmer, representative of the Workers’ Party of Korea. North Korea enhances the iconic ‘hammer and sickle’ (laborers and farmers) of Soviet symbolism by adding a calligraphy brush to depict the intellectuals. The design has been drafted as the emblem of the Workers’ Party of Korea, and you’ll find a monument at the base of the Juche Tower in Pyongyang with each representative holding up their symbols of the party (brush, hammer, sickle). The background of this note is the Juche flame atop the Juche Tower.

Back: Monument to Party Founding. One of Pyongyang’s most recognizable monuments. This monument is rich in symbolism, unveiled in 1995 at exactly 50 meters high to commemorate the 50th anniversary of the founding of the Workers’ Party of Korea. The belt itself is said to be made up of 216 blocks with a diameter of 42 meters, representing General Kim Jong Il’s birthday of February 16, 1942. The text states: ‘Long live the leader and organiser of the victories of the people of Korea, the Worker’s Party of Korea!’ 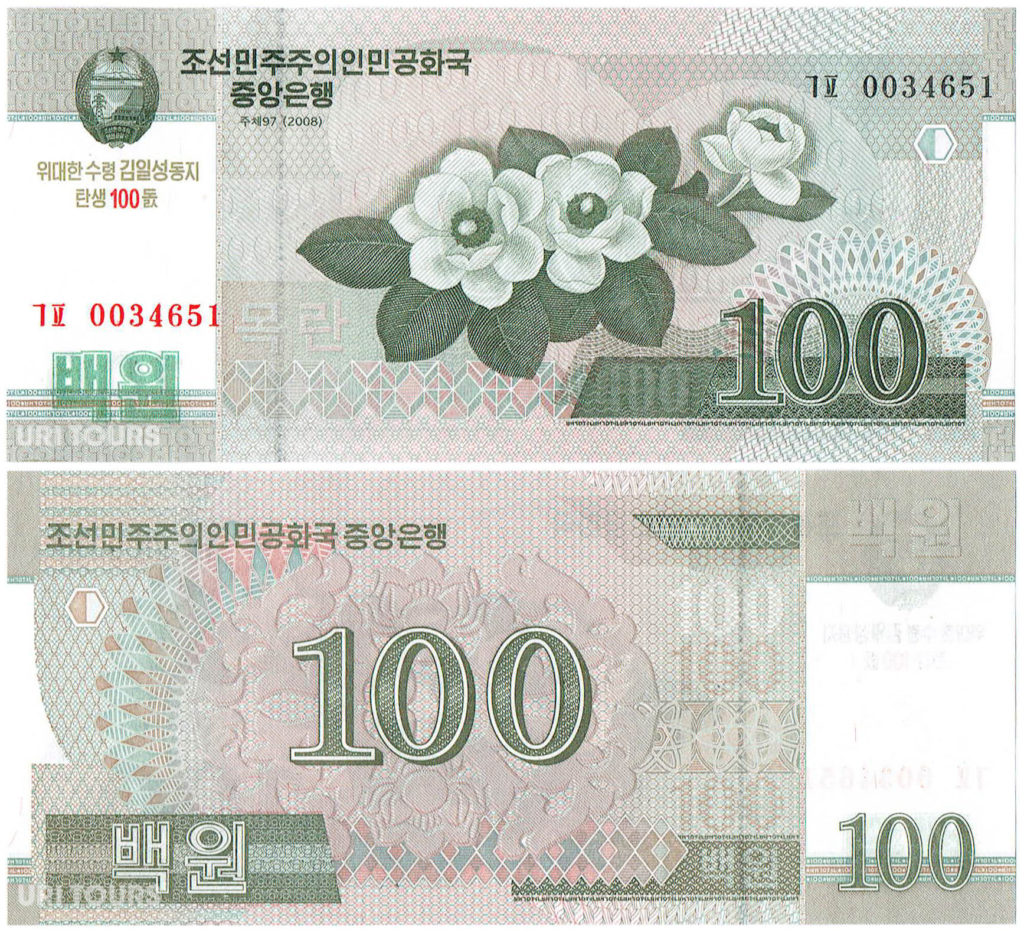 Front: North Korea’s national flower, the Magnolia sieboldii, known locally as the ‘mokran’. The mokran is white in colour and found natively. It’s widely depicted in propaganda artworks, engraved in monuments and printed on items such as postage stamps, and even as the watermark for all of these banknotes! North Korea has two other prominent flowers often mistaken as the national flower, the Kimilsungia (purple Orchid) and the Kimjongilia (red Begonia). 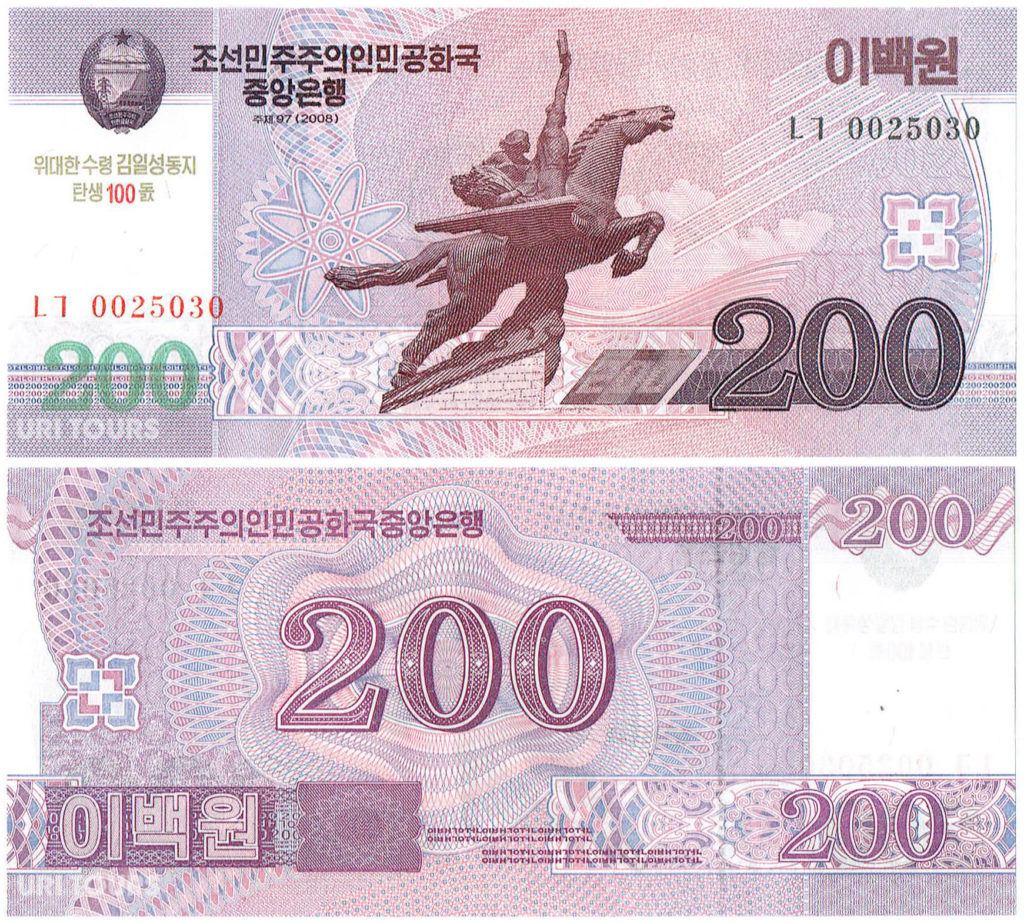 Front: Chollima Statue. This mythological winged horse is said to be able to travel 1000 li (4000km) in a single day. The Chollima represents the national effort to rebuild the nation after the destruction of the Korean War. The post-war mobilization led by President Kim Il Sung was promoted as the ‘Chollima Movement’ to motivate workers in rebuilding the country with speed and efficiency and to strive tirelessly for a prosperous nation. The Chollima and the subsequent term ‘Chollima Speed’ has since become an identifier of swift progress in North Korea. This has inspired modern-day offshoots such as ‘Masikryong Speed’ and ‘Mallima Speed’ to reflect the rapid speed of contemporary developments. 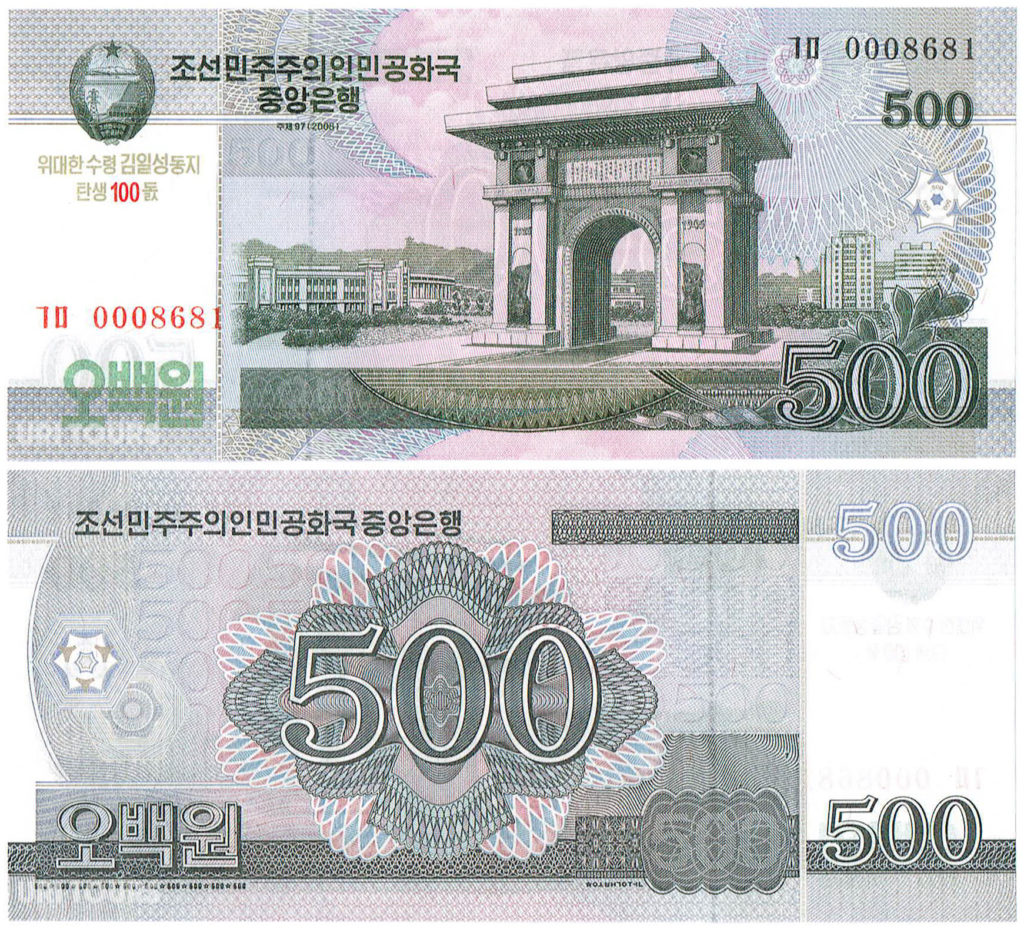 Front: Arch of Triumph. This is typically our first stop on tour, where we’ll take a lift to the top for a panoramic shot of the capital! Standing at 60 meters tall, it is 10 meters superior to the one in Paris, and it was built to commemorate the liberation of Korea from Japanese colonial rule. The dates of 1925 and 1945 inscribed on the Arch signify the dates Kim Il Sung left Korea to devise plans for the national liberation, and the eventual date that he was successful. After Kim Il Sung’s return to Pyongyang after liberation, he gave a famous victory speech to the people at this location. 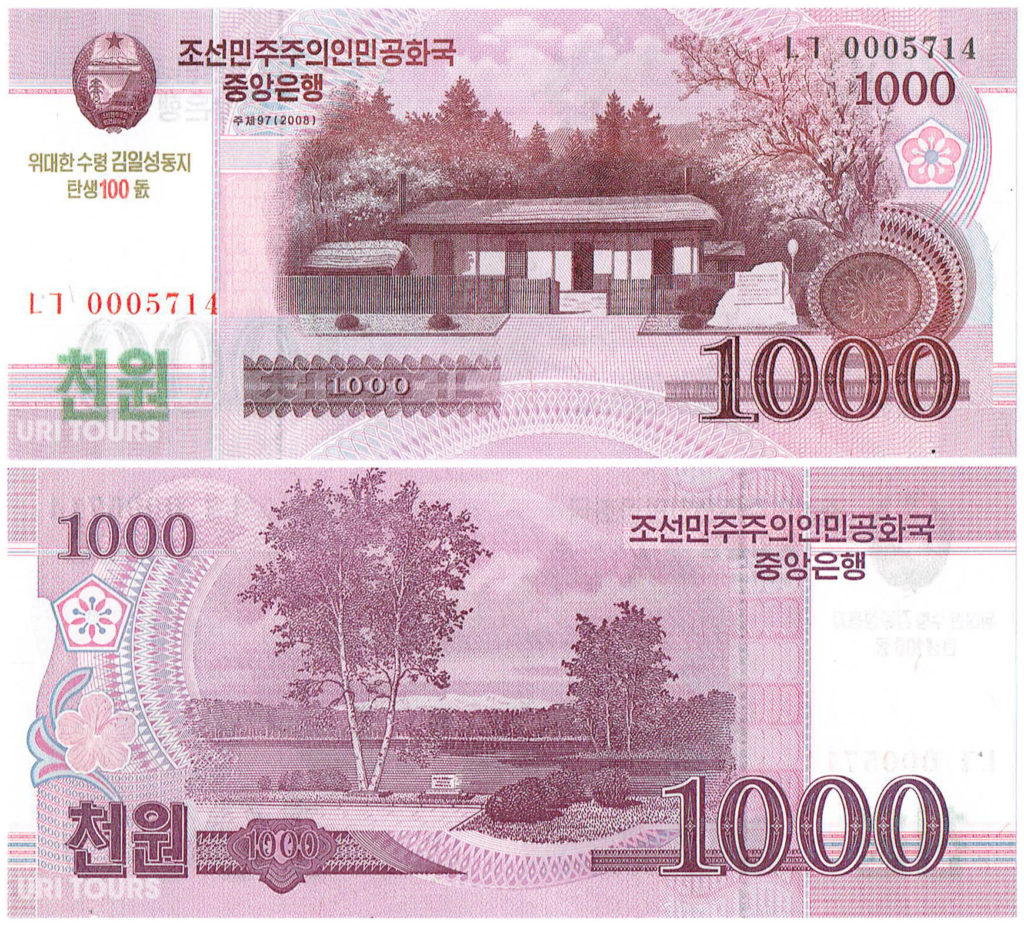 Front: Hoeryong Revolutionary Site. This is the birthplace and native homestead of Kim Jong Suk, who was the first wife of Kim Il Sung, the mother of Kim Jong Il and Kim Jong Un’s grandmother. Kim Jong Suk is referred to as the ‘Mother of Korea’ and is revered as an anti-Japanese hero credited with saving Kim Il Sung’s life. She died in 1949 according to her official biography, and her grave is the centerpiece to the Revolutionary Martyrs Cemetery in Pyongyang, a memorial to the decorated soldiers that fought for the liberation of Korea from Japan.

Back: Birch trees on the shore of Lake Samji in Samjiyon. Mt. Paektu can be seen in the backdrop. The Samjiyon and Mt. Paektu region is scattered with revolutionary sites marking Kim Il Sung’s activities. Lake Samji is a battle site and grand monuments have been built here in commemoration, including the second-largest statue of Kim Il Sung in the country. The birch tree pictured still stands and is visitable today, said to be a ‘witness to history’ as it’s documented in photos of Kim Il Sung taken here before and after liberation. 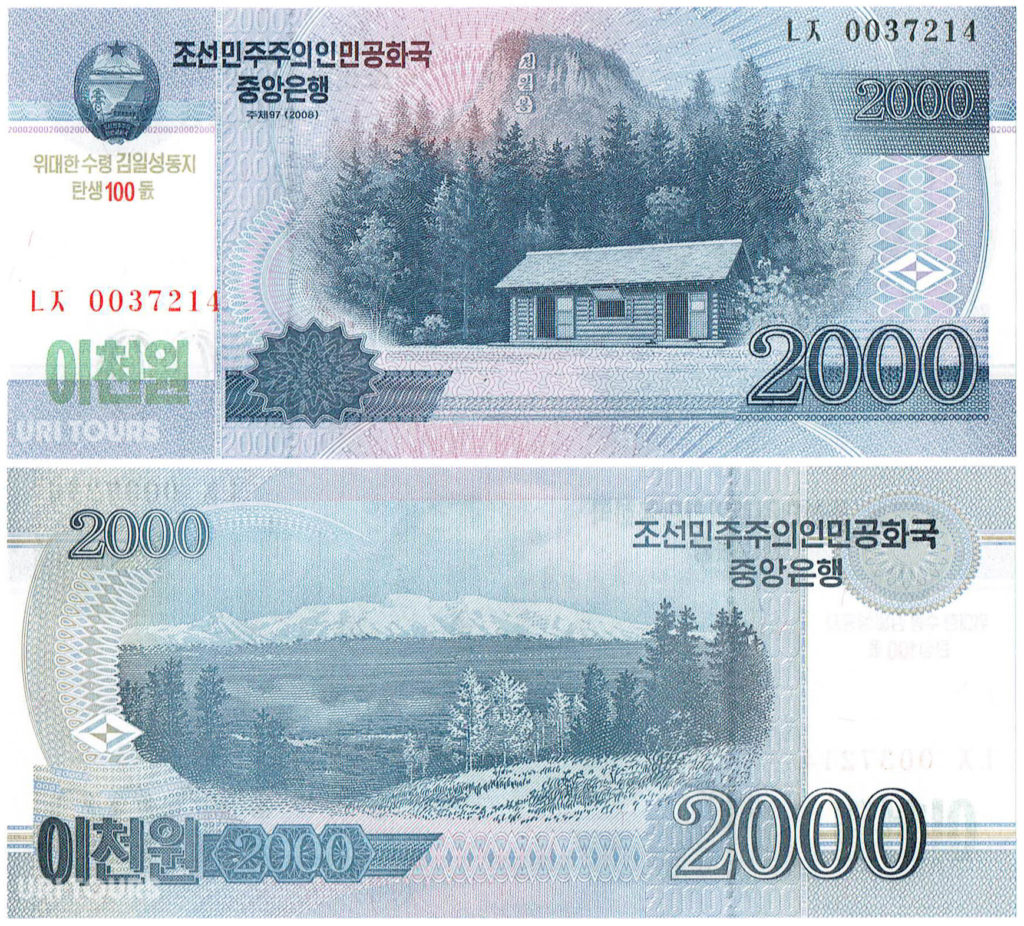 Front: Paektusan Secret Camp. The log cabin pictured is the reported birthplace and native home of Kim Jong Il, born here on February 16, 1942. Paektusan Secret Camp is one of an abundance of secret guerilla bases tucked away within the dense forests and valleys here. This camp includes the headquarters of the Korean People’s Revolutionary Army led by Kim Il Sung. The crest in the background is now known as ‘Jong Il Peak’ in honor of Kim Jong Il.

Back: Mt. Paektu. Mt. Paektu is an active volcano straddling the border of North Korea and China. It’s Korea’s tallest and most sacred mountain and regarded as the spiritual home of all Koreans. For North Koreans, it’s culturally significant as the staging ground of Kim Il Sung’s anti-Japanese activities, and as the birthplace to Kim Jong Il. The caldera forms a massive crater lake with a maximum depth of almost 400 meters deep. It’s an incredibly beautiful landscape, and only accessible to tourists by charter flight, which we organize every year when the weather is best! For more information on this region, read our Mt. Paektu and Samjiyon Travel Guide! 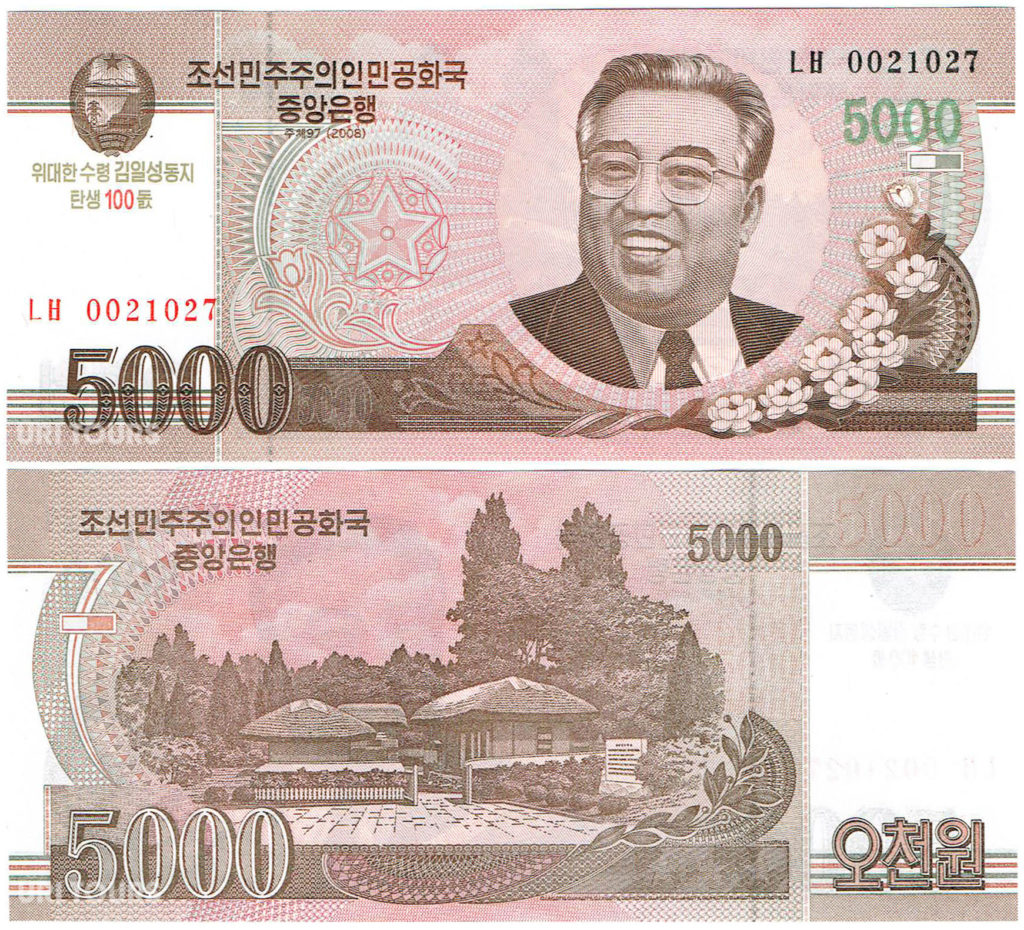 Back: Mangyongdae Native House. This modest straw-thatched house in Pyongyang is the birthplace and native home of Kim Il Sung. He was born here on April 15, 1912, which is now marked as the ‘Day of the Sun’, arguably North Korea’s most important national holiday. Kim Il Sung left Mangyongdae at a young age and did not return until Korea was liberated in 1945. This is one of North Korea’s most sacred sites and you’ll often encounter groups of locals visiting to lay flowers and show their respects. Portraits of Kim Il Sung’s extended family are seen on the walls, and humble tools and artifacts have been preserved here. 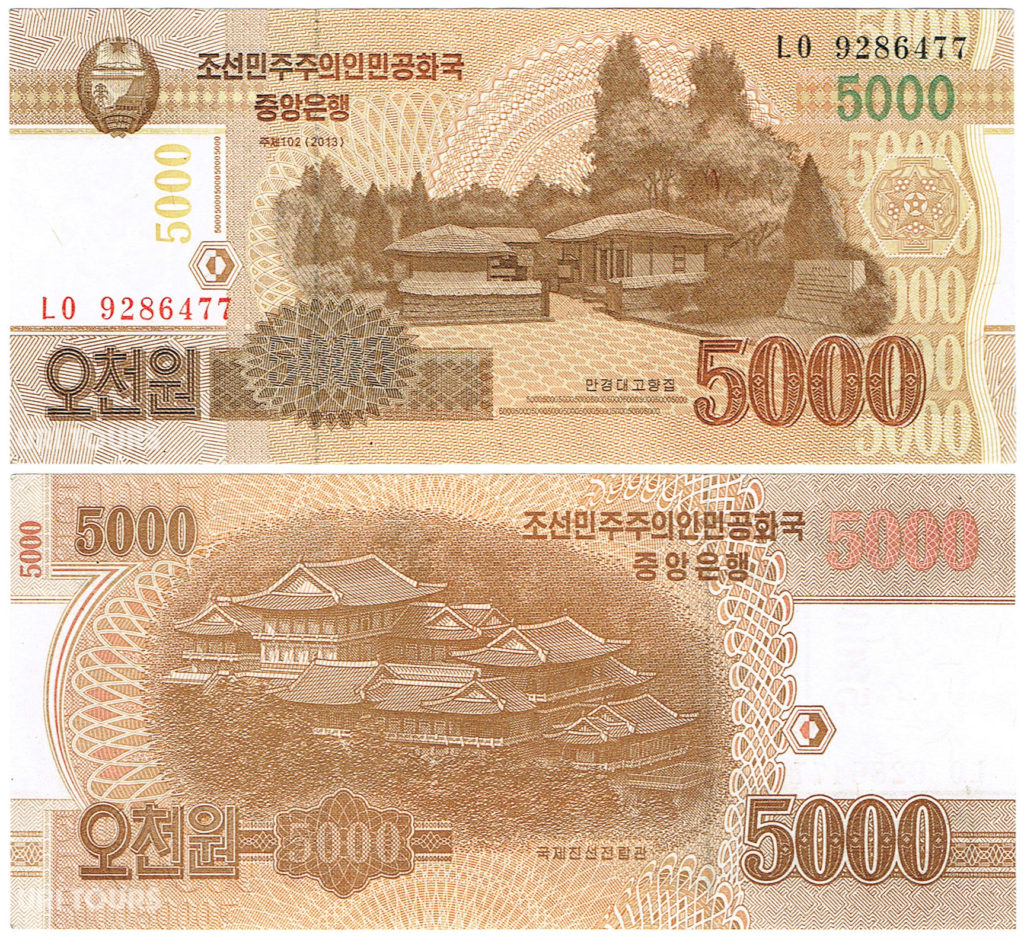 Front: Mangyongdae Native House. Such is the importance of this site, it appears again on the new 5000 Won note with slightly different artwork.

Back: International Friendship Exhibition. This massive museum complex was built in 1978 at the foot of Mt. Myohyang, one of North Korea’s most celebrated mountains. Its traditional architecture spans two buildings and inside you’ll find over 150 rooms housing more than 226,000 gifts presented to North Korea’s leadership from foreign dignitaries of 180 countries. It’s said that with 1 minute to see each gift, it will take you more than 480 days (during opening hours!) to look at every gift on display. Gifts include everything from gem-encrusted swords to tea sets, consumer electronics, regal furniture, bullet-proof vehicles and basketballs signed by NBA stars Michael Jordan and Dennis Rodman. On any tour of ours to Mt. Myohyang, we will visit the International Friendship Exhibition.

Looking to get get your hands on North Korean Won banknotes? Join one of our group tours to North Korea and you’ll have the opportunity, and will visit many of the depicted landmarks too!

What other currencies will you use during your visit to North Korea? Learn more here!