This past September 2013, Uri Tours, in partnership with the Temple of Modern Buddhism in NYC 미주현대불교, led a prominent group of Korean-American Buddhists in an exclusive temple tour of North Korea 북한사찰순례. This group was comprised of Korean-Americans from all over the U.S. joined together by their search for peace and common ground in the Korean peninsula. This group also made small history by being the first all Korean-American tour group to visit the DPRK.

Buddhism’s influence in Korea began to develop during the period where Korea was divided into three kingdoms (Koguryo, Paekje and Shilla). During the Koryo dynasty, Buddhism was even deemed the official state religion in Korea. Although Buddhism saw its slow decline during the Joseon (or Choson) dynasty, many historical relics and famous temples have been proudly preserved both in the South and the North, to the extent they were not destroyed during the Korean War, as part of its national cultural heritage.

In a 7-night temple tour through North Korea, we traveled to over 13 temples and places of religious significance to study parts of the Buddhist history of Korea that became lost with the division of the country. The temples in South Korea are often visited by tourists and locals alike, but in the North, we were among the exclusive few to seek out some of the remote mountain temples.

Our tour started In Pyongyang. Nestled in the beautiful Taesong Mountains (대성산) lies Kwangbop Temple (광법사). It was built in 1727, but after having been destroyed by air raids during the Korean War, it was restored in 1990. 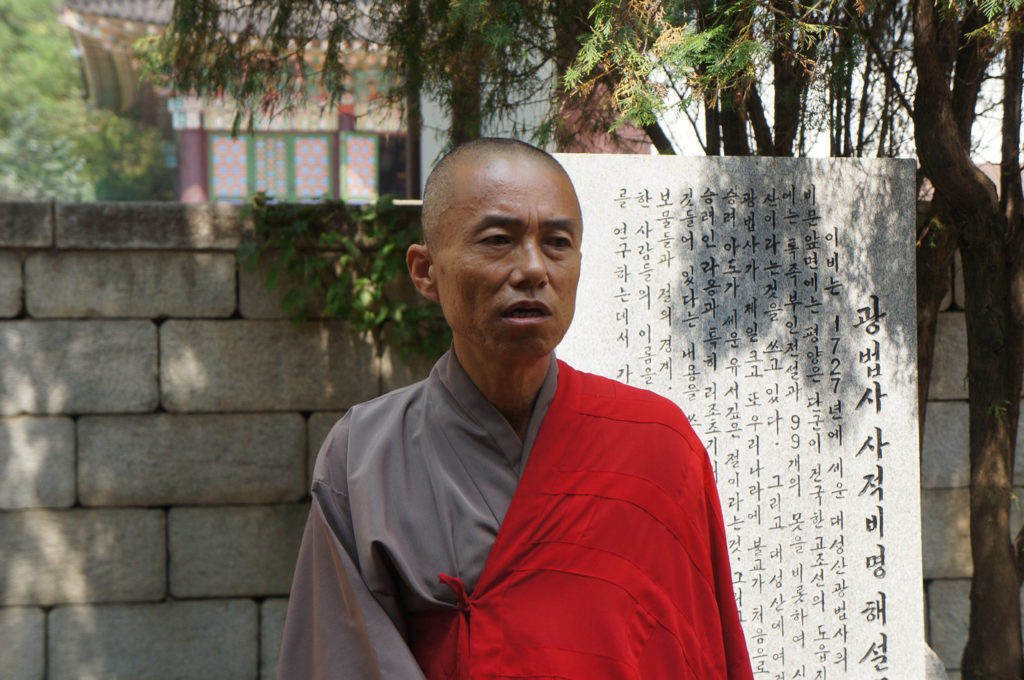 Resident monks greeted us warmly, explained their temple and led us into a ritualistic Buddhist ceremony. 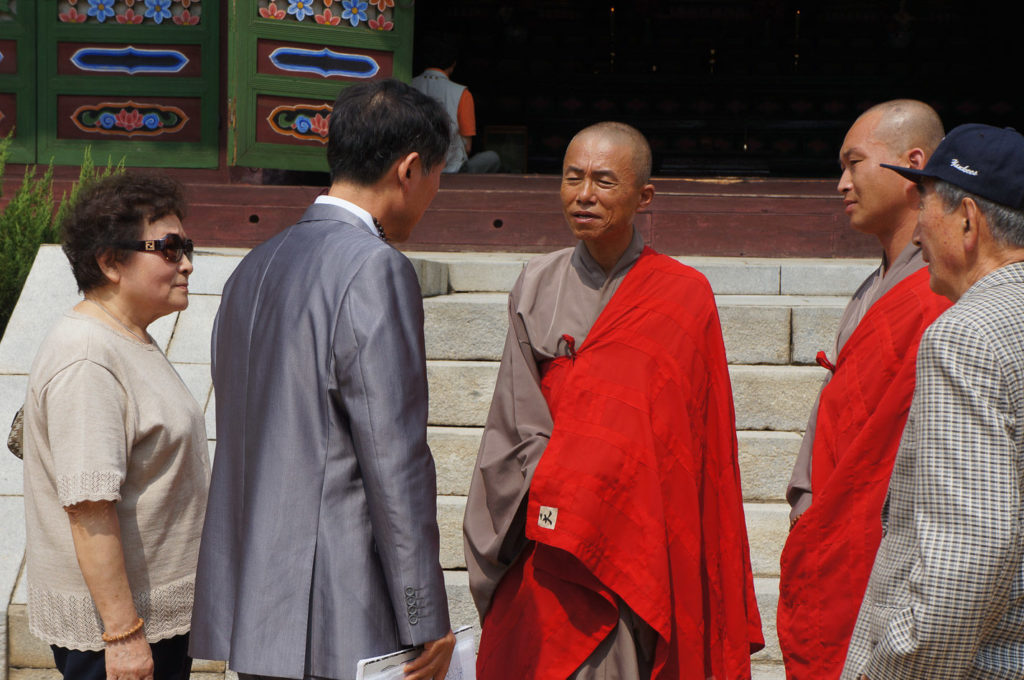 Built in 1042, major parts of the temple were destroyed during the Korean War, but were later restored. Pohyun Temple was one of the great epi-centers of Korean buddhism during the height of its religious influence. 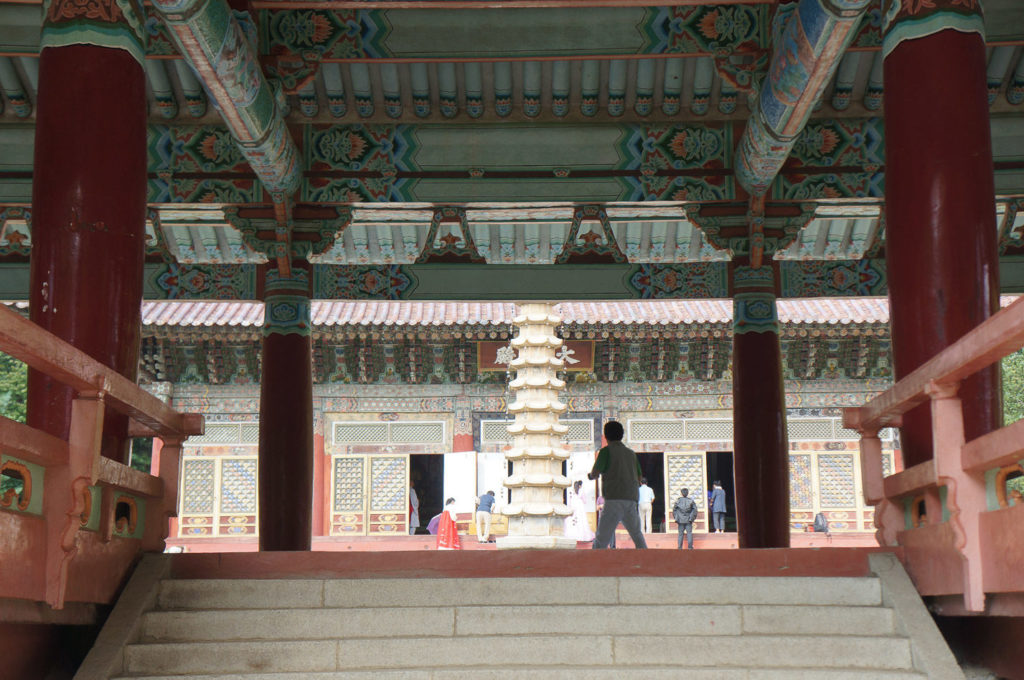 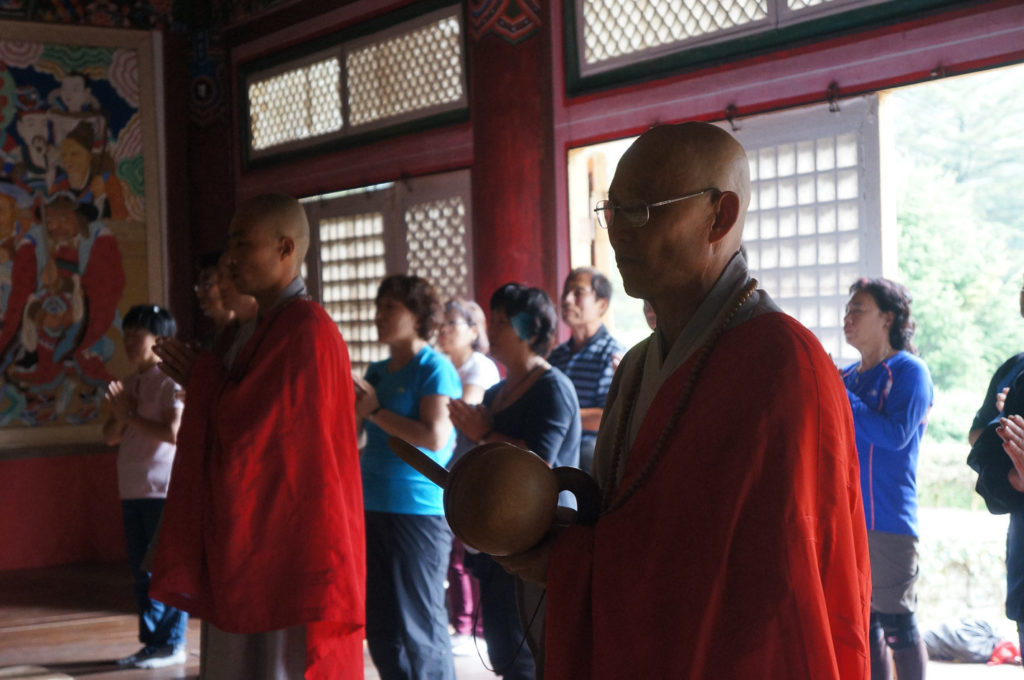 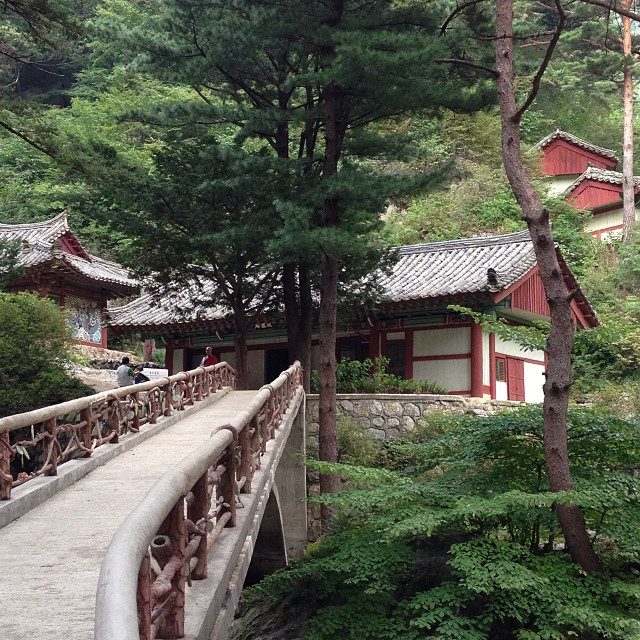 This gem is hidden in the mountains of Myohyang. We hiked about 2 hours to get here and we found a local monk keeping house. We shared a Buddhist ceremony, chants, and then had time to speak with the monk. 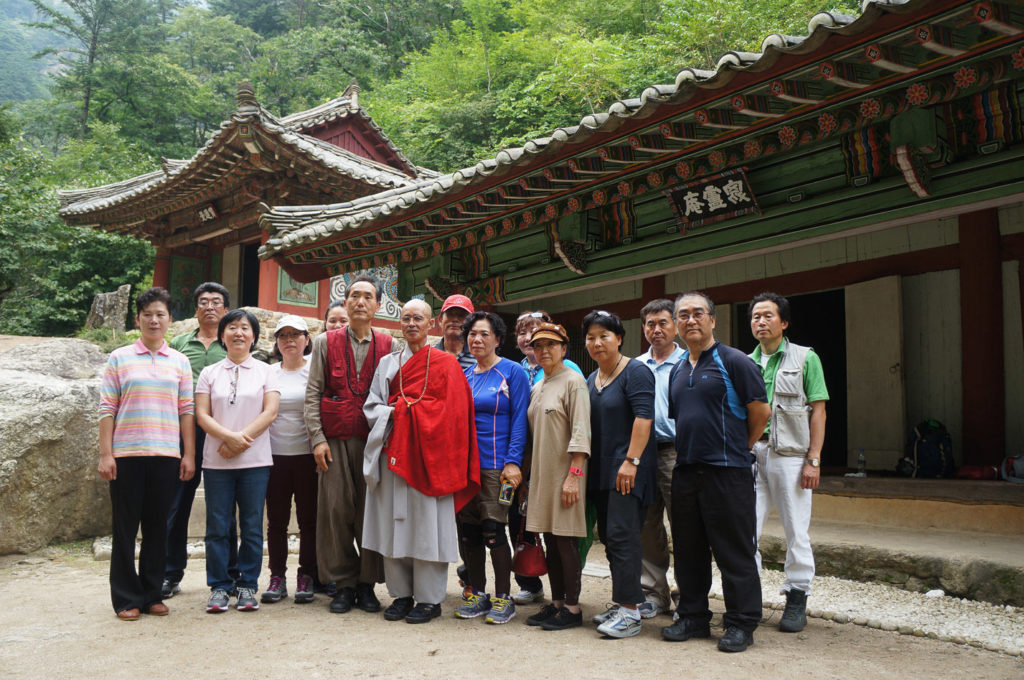 On the side of the base temple, this mountain tiger was keeping close watch on us. The tiger was designed so that his protecting eyes follow intruders from any angle. 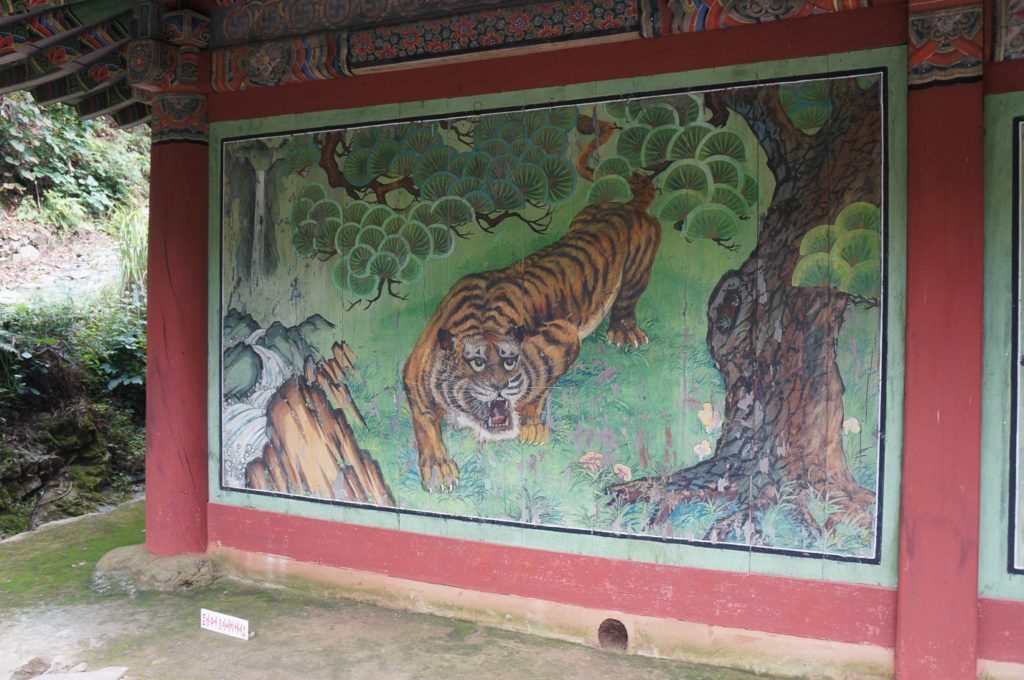 Our next hike was up to the Kumgang Temple, originally named so because it stands east of Kumgang mountains. Our local guide told us that there was no clear trail to this smaller temple, since it’s not often visited. But that we could try if we wanted. So conscious that dusk would soon be upon us, we started the trek not knowing what was ahead. Needless to say, this was the most adventurous hike of our trip. We crossed waterways, held onto branches, and helped each other through dirt ditches as we ascended to our nirvana. 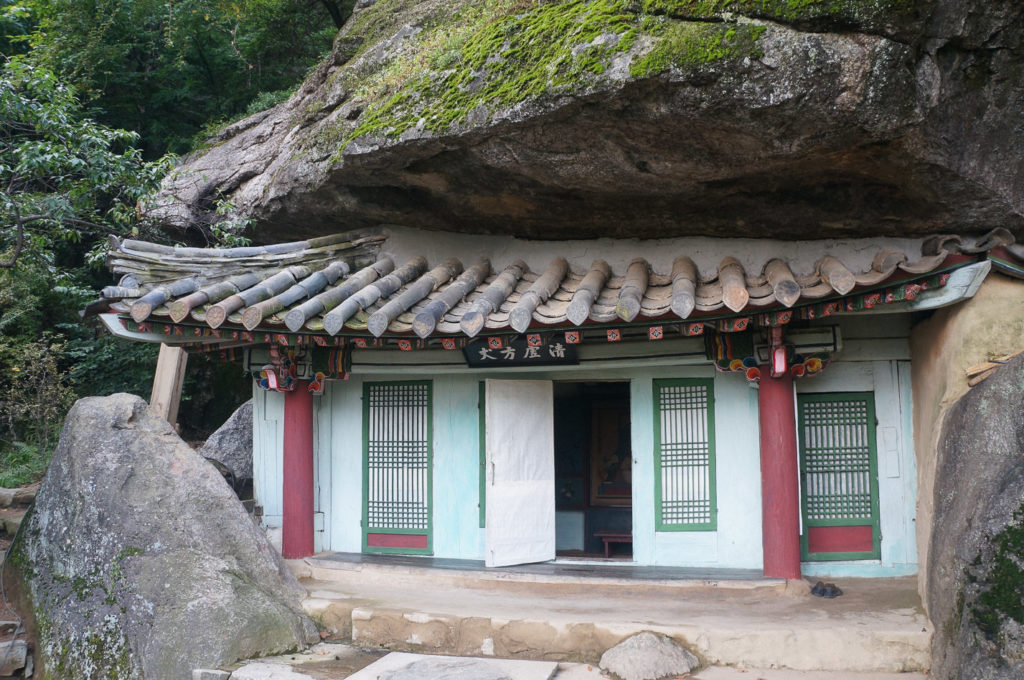 This temple was originally built in 955 A.D. and restored in 1936. It stands underneath a cavernous rock and is modest in size. We were greeted by one keeper and 2 dogs. The interesting thing about this temple was its apparent use of a solar panel. Progressive indeed.

Pyohunsa is found in Inner Keumgang 내금강. This temple is significant because of the four great temples of Mount Kumgang, this is the only one to have survived the Korean War. It was originally built in 670 A.D. during the Shilla dynasty and rebuilt in 1778. The famous pagoda that stands in the square is said to house the ashes of the famous Buddhist monk Sosan. It’s currently treasured as a national symbol of cultural heritage. 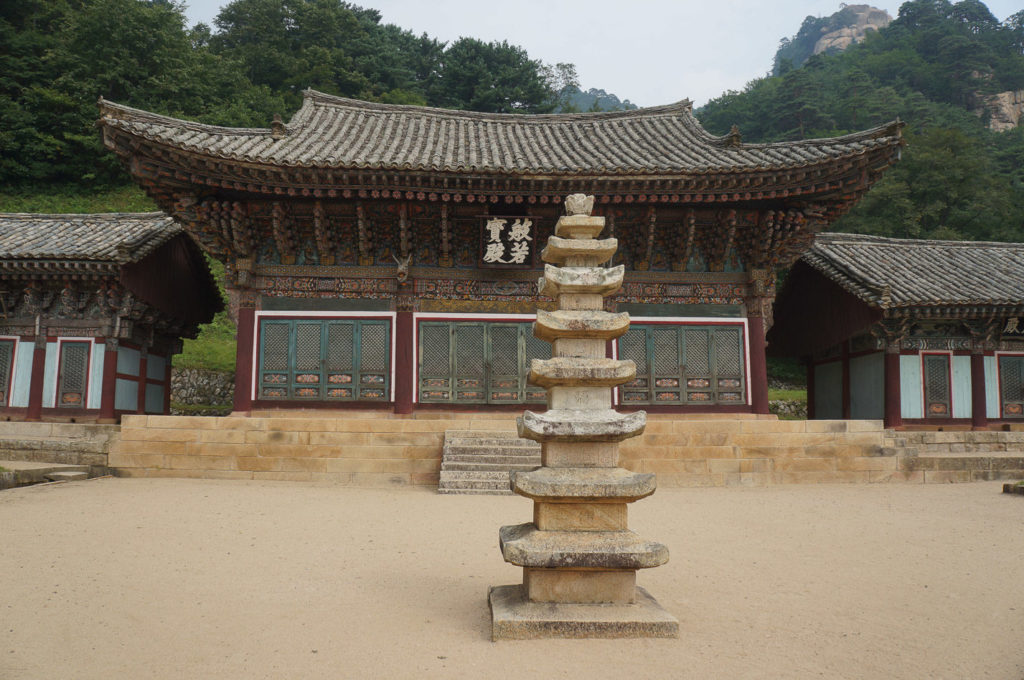 When we arrived at this temple unannounced, we were informed that the resident monk left for home because he was not feeling well. But the local keepers called him to tell him they had visitors and he said he would come back to greet us.

The monk came in a hurry and opened the doors of the temple. And there we stood in front of adorned Buddhas as the monk led the group into chants. 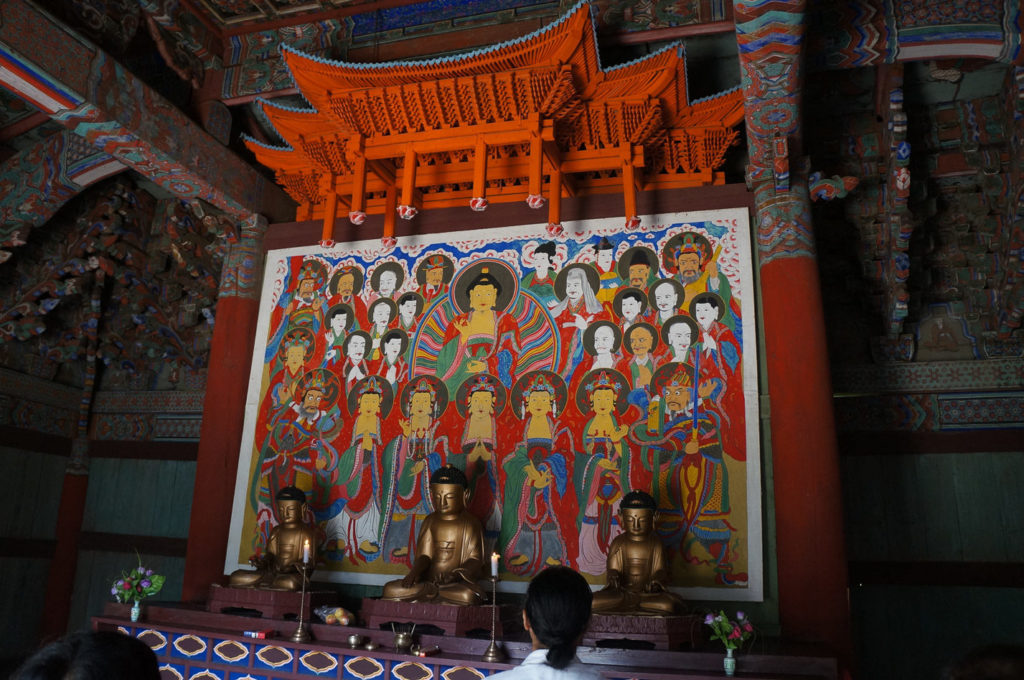 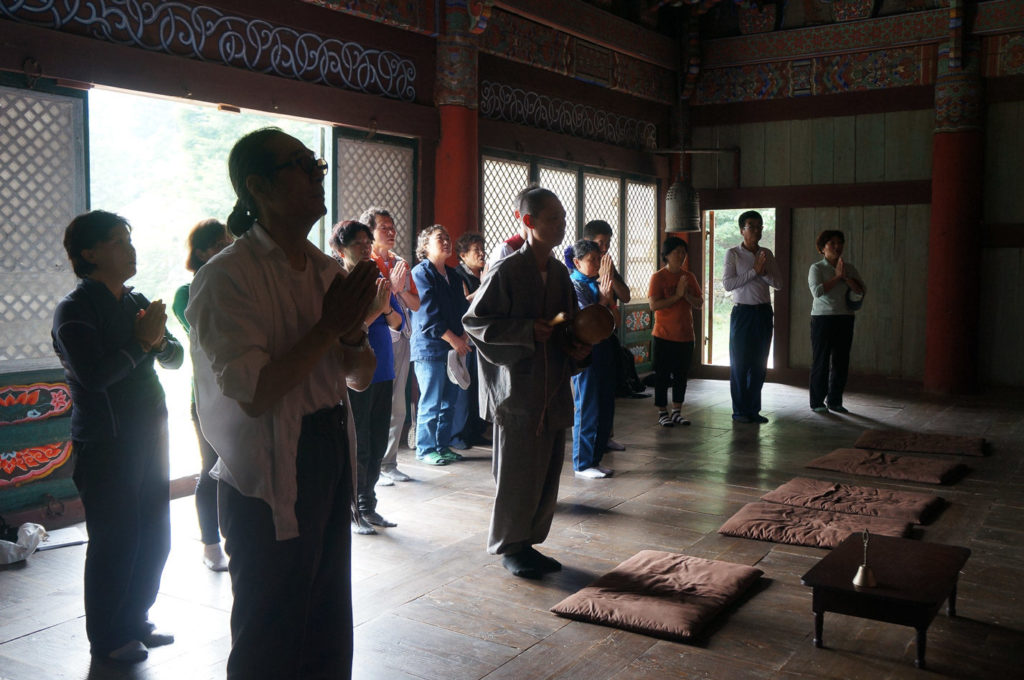 We continued our ascent up the Inner Kumgang Mountains 내금강. The Kumgang Mountains are divided into three parts: Outer, Inner and Sea. Despite a shooting incident that led to the closure of the Kumgang resort area from the South, the Kumgang tours have continued from the North. And indeed, we bring tourists to this mountainous area on some of our more in-depth itineraries. However, tourists typically do not visit Inner Kumgang. Inner Kumgang is closer to the DMZ border between North and South Korea, and because of this there are many more military checkpoints. Needless to say, we must have brought good Karma with us because they stamped us right in. 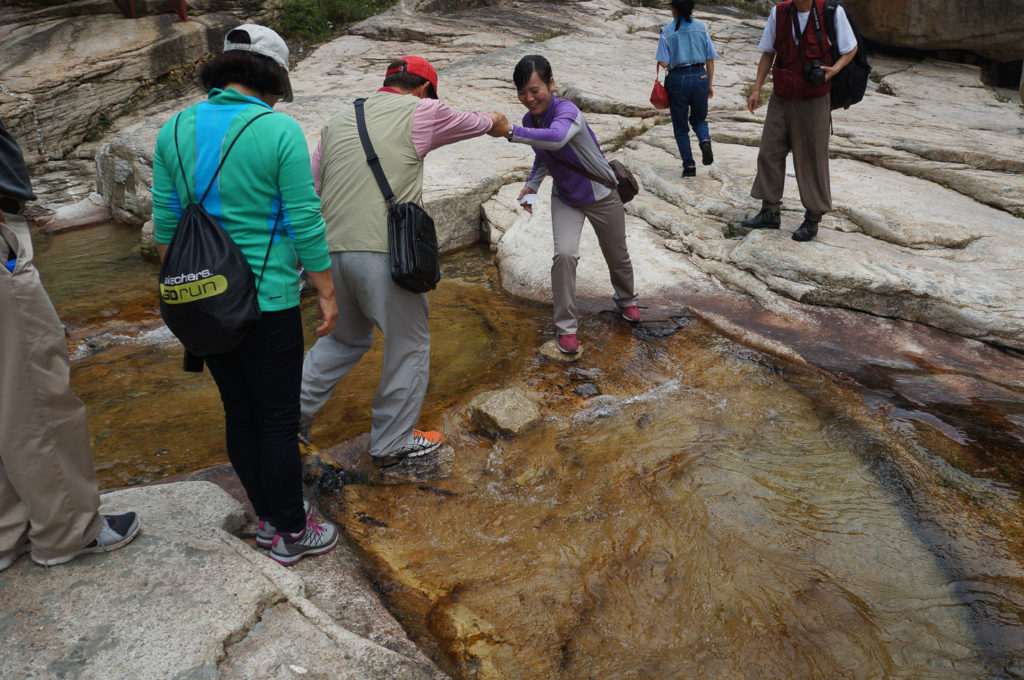 Just when our hiking pace started to slow, we saw the temple rafters peeking down at us over the trees. There it was, the Podok Hermitage. 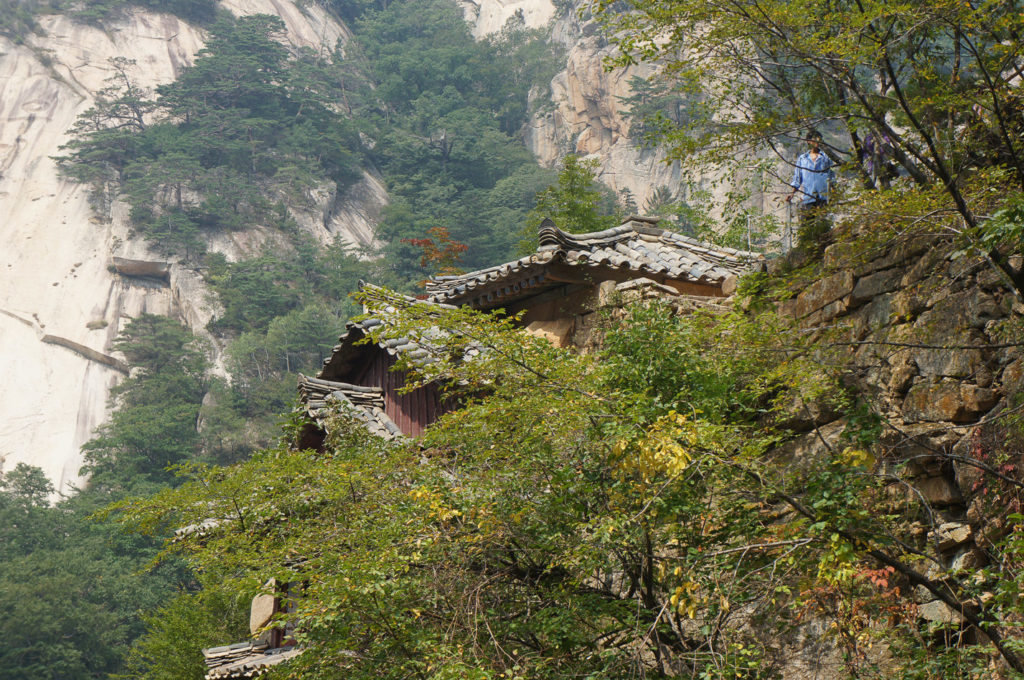 The Podok Hermitage was built during the Koguryo dynasty and was restored in 1675. This house with one room is suspended by a single copper pole on a 20-meter high cliff. 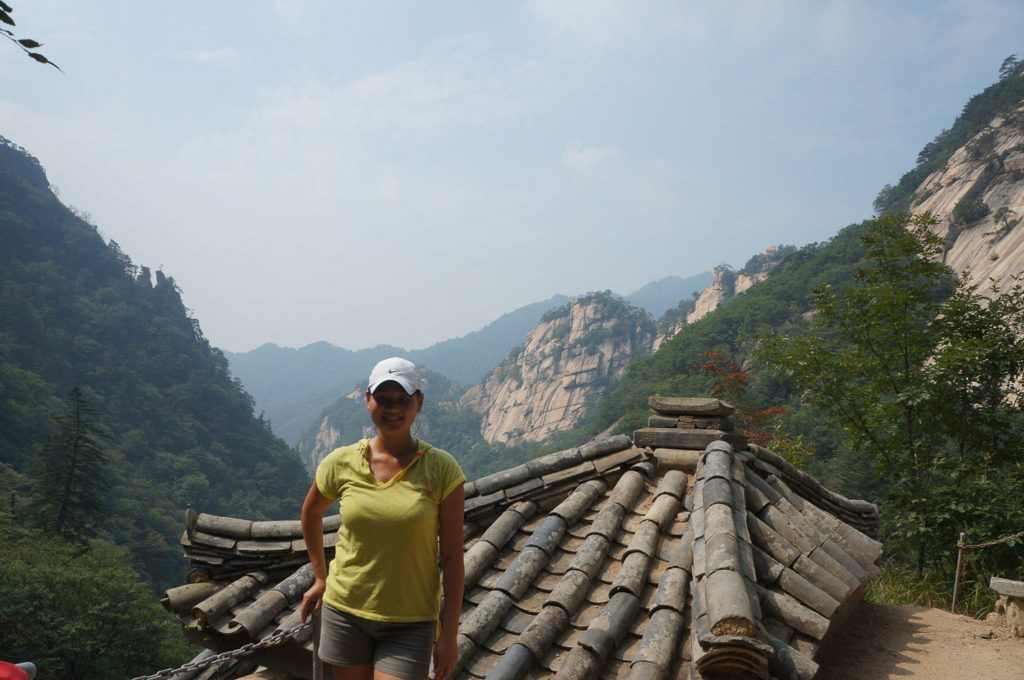 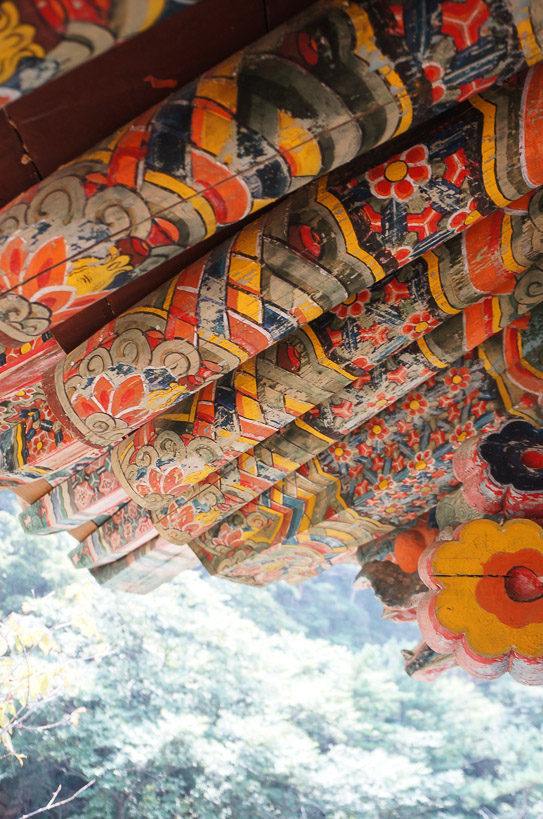 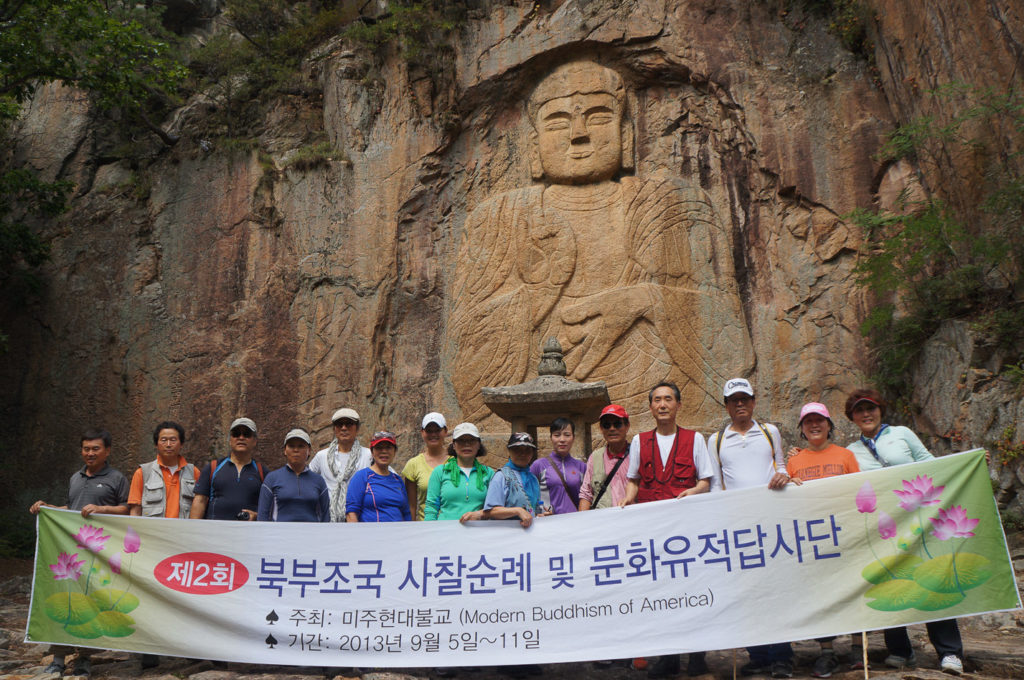 This beauty is also found in Inner Kumgang. It was carved during the Koryo dynasty and it is the biggest Buddhist stone image in Korea.

Further down the trail, we found these smaller but also stunning stone images near original Buddhist tombs: 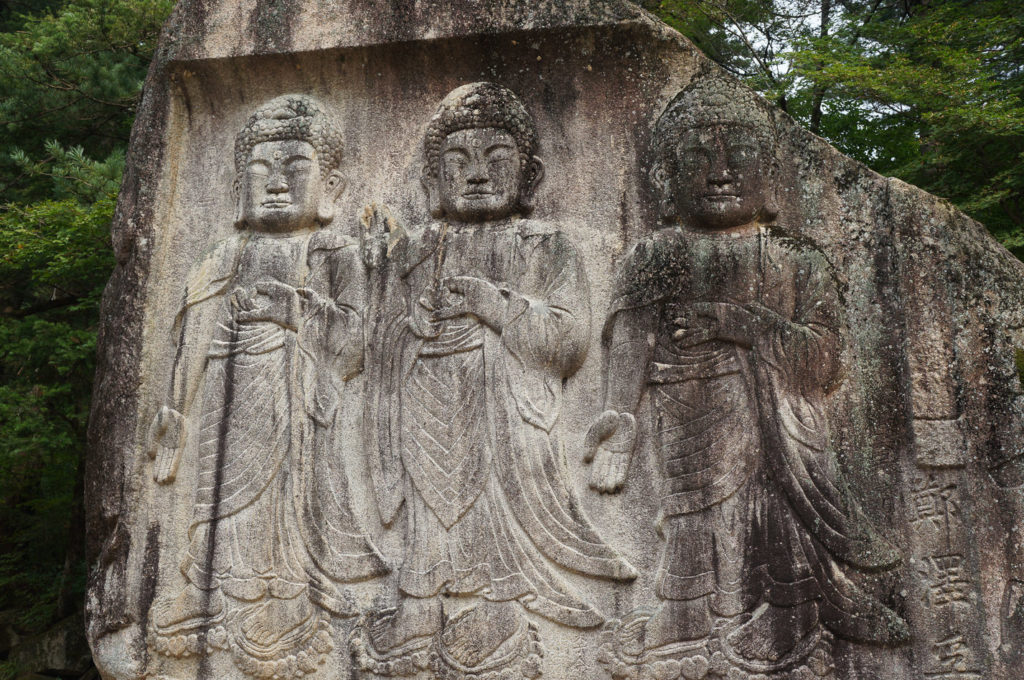 Despite the heavy discussion we have in the West on the suppression of religion in the DPRK, we found that the North Koreans proudly maintained these temples not necessarily for religious purposes but as part of their cultural heritage. Although we cannot know whether the monks truly believed in Buddhism as a higher truth, or if they had the freedom to, we were happy to hear their proud explanations of why their temples held historical significance and to share in ceremony.

These Korean-Americans found some thread of common ground in the DPRK, whether it was through Buddhist ceremony or through the conversations they had in their shared language and the songs they sang together, unknowing that the North and South actually had a few in common. For a short 7 days, we managed to get along.

For more opportunities to visit North Korea, visit our North Korea Tours page. If you’re interested in customizing a tour with us for your interest group, please contact us. To see some of the sites we’ve mentioned in this post, check out our North Korea Ultimate Adventure: Remote Mountain Tour 2014.