October 10 is an important date in North Korea, marking the anniversary of the founding of the Workers’ Party of Korea (WPK) back in 1945. The day is known as Party Foundation Day.

What is the Workers’ Party of Korea?

Founded by President Kim Il Sung, the WPK has been North Korea’s ruling party since the country’s inception and is tasked with implementing the ideologies and cause of President Kim Il Sung and Chairman Kim Jong Il to build a thriving independent socialist nation. The WPK guides all political, economic, military, and cultural matters in North Korea. North Korea’s Supreme Leader, Kim Jong Un, is the Chairman of the WPK.

Why is Party Foundation Day so important?

The WPK is attributed to ‘organising and guiding all the victories of the Korean people’, a quote proudly emblazoned on the Monument to Party Founding, one of North Korea’s most striking landmarks. The roots of the WPK go back to 1926 with Kim Il Sung’s Down-With-Imperialism Union, his principle of independence being credited to have navigated Korea through liberation from the Japanese in 1945, and to the subsequent formation of the DPRK in 1948 as an independent socialist state. These are cornerstone events deeply woven into North Korean identity.

As such, celebrations on Party Foundation Day are fundamentally political but immensely patriotic. It’s a date to commemorate the socialist state of the DPRK, the feats and achievements of the Korean people, and the cohesion of society around the Party and leader (single-hearted unity) which has made it all possible.

How is Party Foundation Day celebrated?

North Korea has held military parades every five years on Party Foundation Day since 1995 (the 50th anniversary). Commemorative festivities such as mass dances, concerts, exhibitions and sporting events are arranged, and ceremonies at venerated monuments are also held. Party Foundation Day is a public holiday, and it’s a joyous atmosphere with people visiting family and crowding parks and funfairs to enjoy the last of the mild weather before winter sets in.

On the last jubilee anniversary in 2015, we were there to see the massive military parade rattle down the street. See below a video from the event in Kim Il Sung Square. That evening there was a 10,000-strong performance on a floating stage in the Taedong River followed by massive fireworks!

Where to visit on Party Foundation Day? 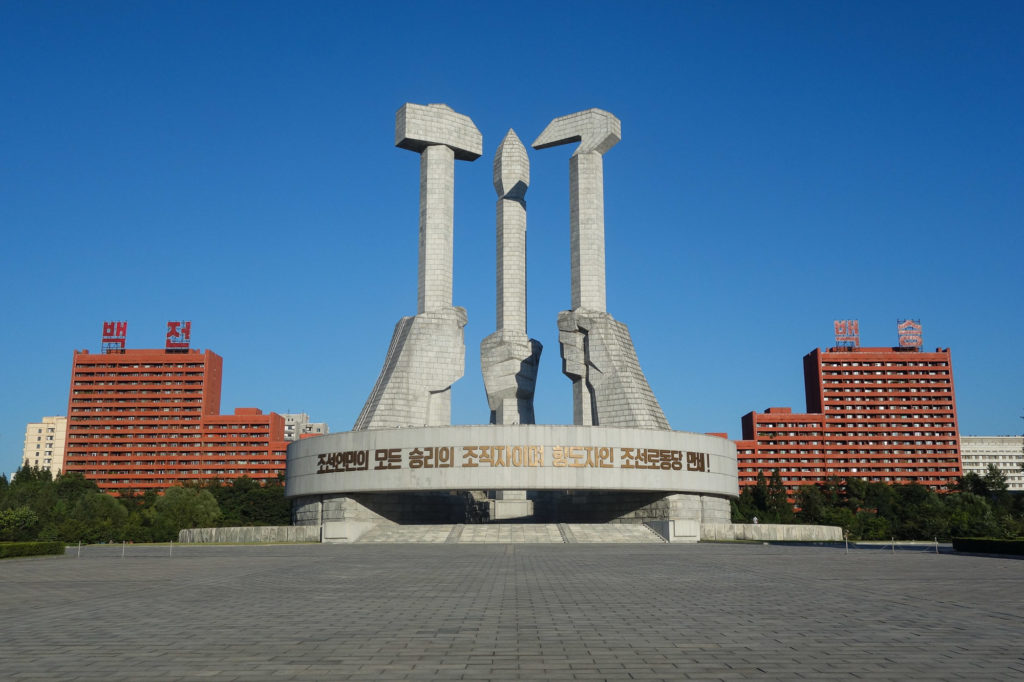 This gargantuan monument is one of Pyongyang’s most recognisable landmarks. It was unveiled on the 50th anniversary of Party Foundation Day to honor Kim Il Sung’s achievements in building the Party. Every aspect of the monument is rich with symbolism, the design itself depicting the emblem of the Workers’ Party of Korea.

Constructed in 1923 during the Japanese occupation of Korea, this building is where President Kim Il Sung proclaimed the founding of the Workers’ Party of Korea. Opened as a museum in 1970, the historic timeline of events and preserved relics are exhibited here. The colonial architecture of the building itself is one of few examples to survive the Korean War.

Tower of the Juche Idea

A prominent tower in Pyongyang dedicated to North Korea’s official ideology, the Juche Idea. The Juche Idea is often simplified as ‘self-reliance’, or that ‘man is the master of their own destiny’. The Juche Idea is the guiding ideology of the Workers’ Party of Korea, and a statue representing the primary components of the WPK sit at the bottom.

We run tours to North Korea for Party Foundation Day every year. Take a look at our upcoming group tour schedule or organize a private tour!