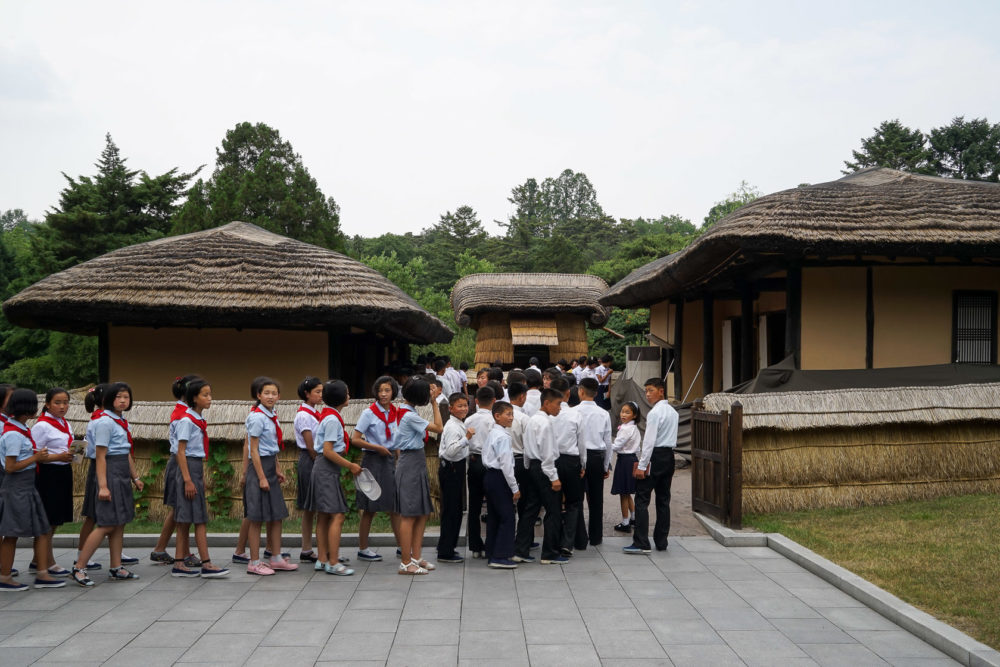 The birthplace of Kim Il Sung is just outside of Pyongyang. The area has been kept in pristine condition and is considered a sacred site to the North Koreans. For someone that rose to such power, he came from a rather unassuming straw hut, proving the revolutions modest roots. The 4 generations of his family before him that inherited the hut worked as care-takers for the nobles that owned the land the huts now sit on. You can see their humble tools and artifacts of their past on display here. A defective but functional pot that was bought by his grandmother at a discount is now a national treasure on display here. There is also the same straw mat that Kim Il Sung slept on when he returned from his rebel struggles in Manchuria. Check out the inside of summerhouse to see how the family would find refuge from Korea’s scorching summers. Nobody is allowed inside of the huts, but you’re able to take a peek inside as you walk past. Inside one of the living rooms, you can see portraits of Kim Il Sung’s extended family, including his cousin, brother, and father, who all fell in the revolutionary struggle. Many Pyongyang residents pay tribute to their leaders sacrifice by making their own 12 kilometer pilgrimage to the site, and during certain seasons this is a prime field trip area for school children.  The song played at Mangyongdae Native House is named “Nostalgia.” It was written by Kim Il Sung himself and it fits the solemn atmosphere. After visiting this house, many are able to sympathize with the eldest son who left his family for 20 years to fight for his country’s independence. It should be noted that the house currently on display is a reconstructed version of the original, due to the natural degradation of the materials used in the original’s construction.