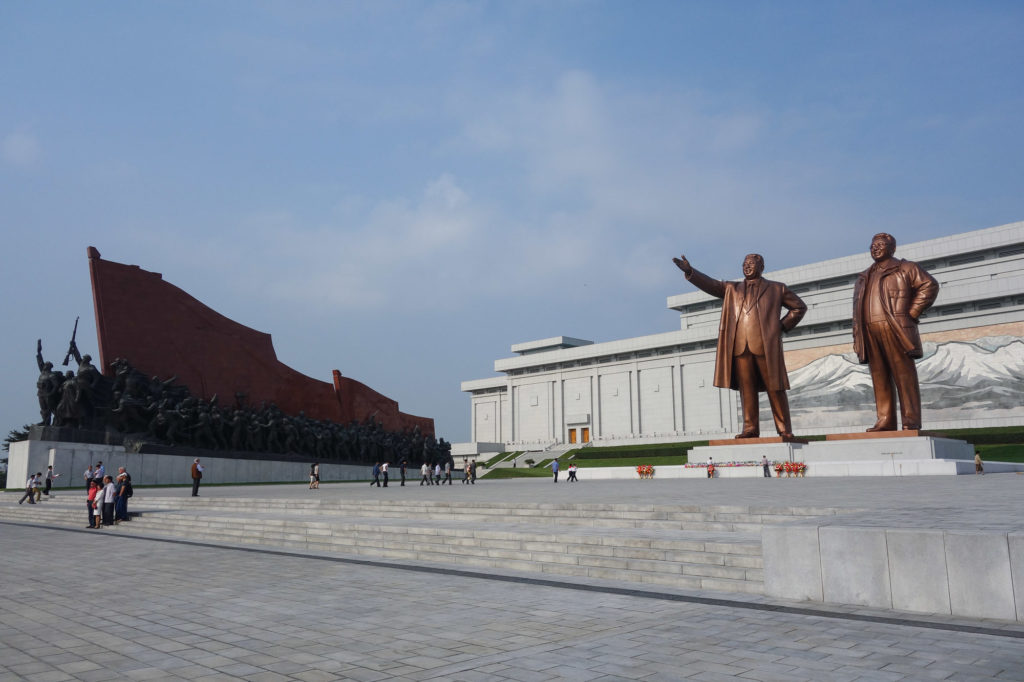 The Mansudae Grand Monument (Grand Monument on Mansu Hill) is an iconic complex of monuments located in North Korea’s capital, Pyongyang. The site is most notable for its centralized bronze statues of North Korea’s late leaders, President Kim Il Sung and General Kim Jong Il, which stand at 22 meters tall. The statues are flanked by two group sculptures, the ‘Monument to Anti-Japanese Revolutionary Struggle’ and the ‘Monument to Socialist Revolution and Socialist Construction’. The backdrop of the monument is a stone-mosaic mural adorning the Korean Revolutions Museum of the famous Mt. Paektu, which has deep ties to the hereditary Kim leadership. 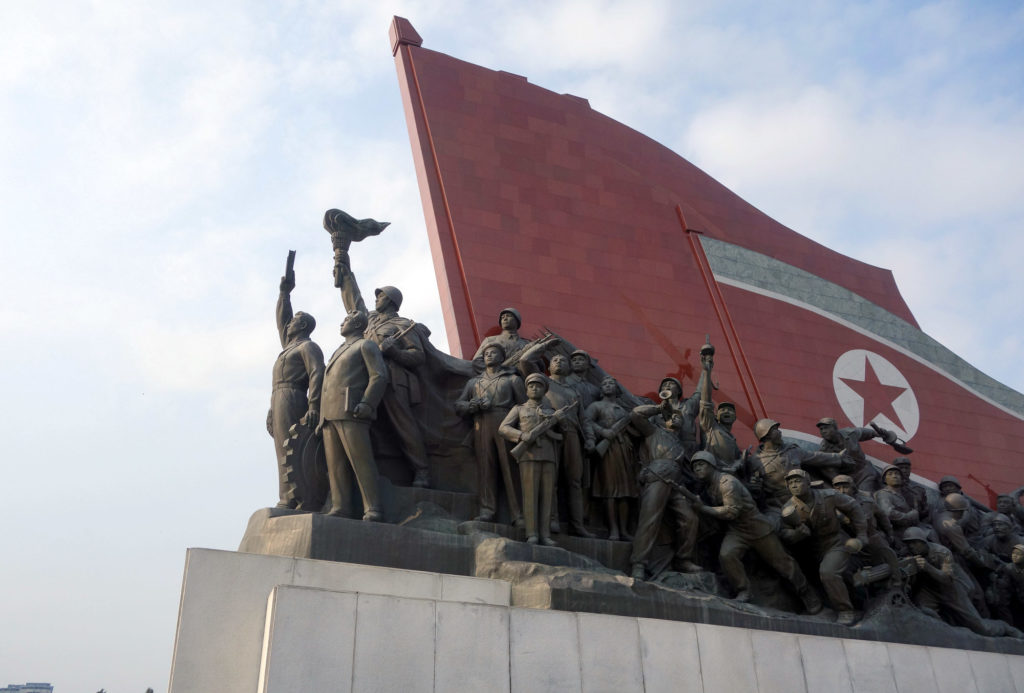 The Mandusae Grand Monument site covers an area of 240,000m² in total, with a wide unobstructed view of central Pyongyang and sits symmetrically to the Workers’ Party Monument across the Taedong River. 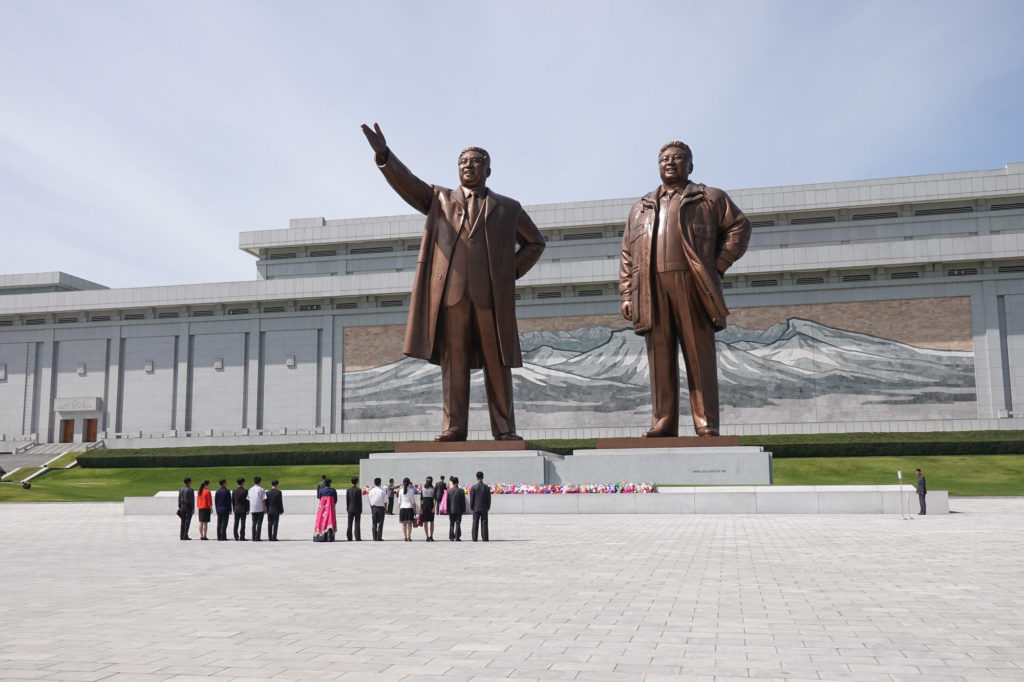 April 1972: The Mansudae Grand Monument was unveiled to commemorate the 60th birthday of President Kim Il Sung, an important annual holiday in North Korea. Originally the statue of President Kim Il Sung stood alone, a depiction of his younger self with a stern facial expression. The Korean Revolution Museum behind the monument also opened, having been relocated from the original site of its 1955 inauguration.

April 2012: Commemorating the 100th birthday of President Kim Il Sung, renovations were made to the Mansudae Grand Monument to add a statue of General Kim Jong Il after his passing in 2011. At the time, additional changes were made to President Kim Il Sung’s statue, notably the smiling facial expression, to depict him in older age closer reflecting the current portrait image of him used throughout the country. Marshal Kim Jong Un attended the unveiling ceremony alongside senior officials, and it was reported that over 300,000 people crowded the surrounding areas.

January 2013: General Kim Jong Il’s statue was altered to depict him wearing the signature parka jacket which he wore often on field-guidance trips throughout the country.

How is the site used?

The Mansudae Grand Monument was built to highlight the revolutionary achievements of President Kim Il Sung and General Kim Jong Il. The site has become a symbol of the victories and prosperity of the nation, where men, women, and children from all walks of society visit to show respect to the leaders. This typically involves the laying of flowers followed by a deep bow at the base of the monument. Locals in Pyongyang usually visit the Mansudae Grand Monument at least once a year, commonly during national holidays or events. The Korean Central News Agency regularly includes footage of the monument in broadcasts, particularly during anniversaries when large wreaths are laid and locals visit in high numbers. The complex is often visited by couples as a backdrop to their wedding photos.

Although a spacious area, the Mansudae Grand Monument is not to be treated as a public square. People will not gather or pass through the site outside the explicit intention of visiting the statues to show their respects. The site is swept by caretakers to keep it spotlessly clean at all times, and the speed limit on Sungri (Victory) Street is reduced for motorists passing by the monument. 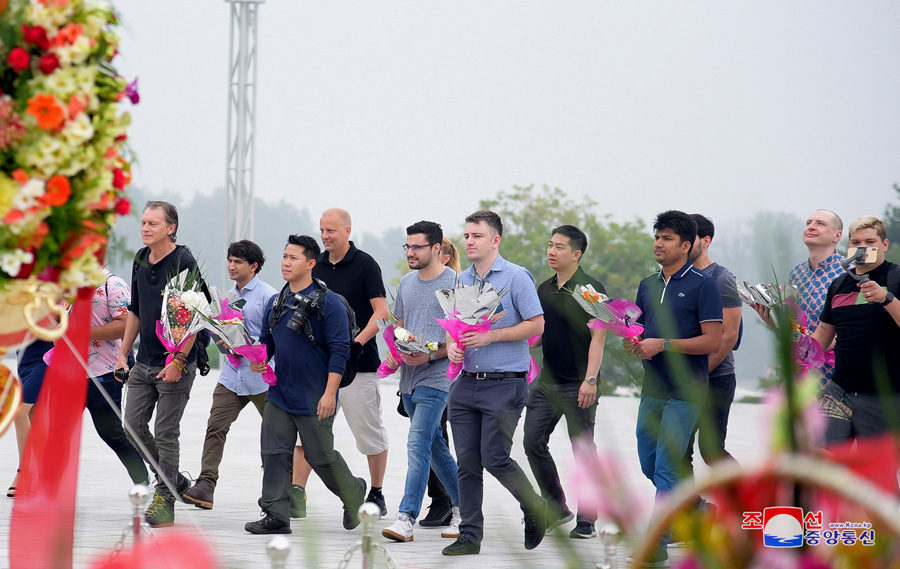 What Is The Etiquette?

Visiting on our tours

Visiting the Mansudae Grand Monument can be arranged on all our tours, however, is permitted only for those that sincerely wish to visit the site and who are willing to follow local etiquette. It’s conveniently located in central Pyongyang, not far from the Grand People’s Study Palace and Kim Il Sung Square.

On major holidays, we typically visit early in the morning alongside locals, and we otherwise like to align it after a formal visit to the sacred Kumsusan Palace of the Sun (requiring formal dress) so we all look our best for the occasion!

As part of the visit to the Mansudae Grand Monument, we’ll also visit the nearby Chollima Statue.

If you’re interested in visiting the Mansudae Grand Monument, check out our scheduled group tours or arrange a private tour!