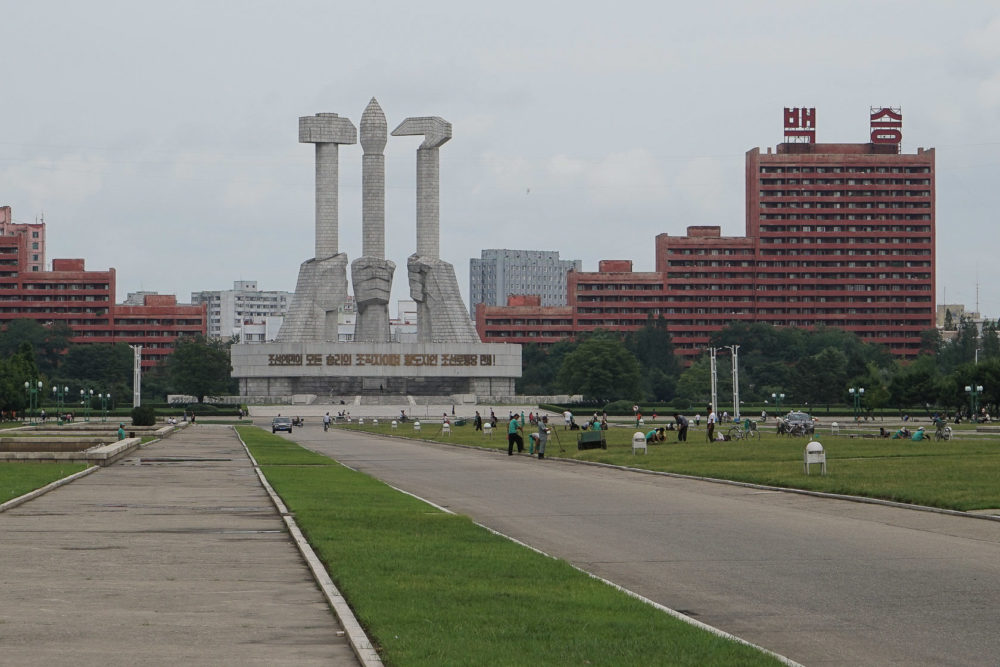 The Monument to the Party Founding was built to commemorate the 50th anniversary of the Workers Party of Korea. It is located east of Pyongyang’s city center and near the banks of the Taedong River. Like many other sites in the DPRK, the monument is abundant with symbolism. it was designed by artists from Mansudae Art Studio to be 50 meters high. A belt of 216 concrete blocks surround the pillars, February 2nd being Kim Jong Il’s birthday. The Korean words on the outside of the belt give credit to the Workers Party of Korea for the victories of the Korean people. Inside the belt is 3 embossed bronze murals with themes such as anti-imperialism and the revival of the fatherland, inheritance of the Juche torch being passed among families, and the struggle for the DPRK’s sovereignty within the international community. The tallest aspects of the monument are the hands holding the brush, sickle, and hammer, showing the unity of the Korean people. Each of these symbols represent the intellectuals, farmers, and workers, respectively. From a certain photogenic angle, 2 blood-red apartment buildings stand behind the monument with the Korean words for everlasting victories, complete with Stalinist architecture. The entire site, not including the apartments, sits on 6 acres of well-kept land with over 53,000 trees, 12 fountains, and a plaza for public use. Despite this, the monument site is surrounded in drab but colorful apartment complexes. The monument is one of the DPRK’s most recognized locations, depictions of it have been featured on stamps and the currency, longtime favorite souvenirs of many tourists.