Virtual Tour Through All Stops of the Pyongyang Metro

I was given a rare treat. It was not an expensive piece of jewelry, or a free ticket to Hawaii. It was better than that. I took a 3-hour ride through all 16 of the stations in the Pyongyang Metro, a priceless experience.

Riding on the Pyongyang Metro is as mundane as it gets. People sleep and even snore, students read, men ogle the girls, and it’s mostly quiet – people are just getting to where they need to go. But for a foreigner peeking in, riding the subway is far cooler than seeing a really tall monument. 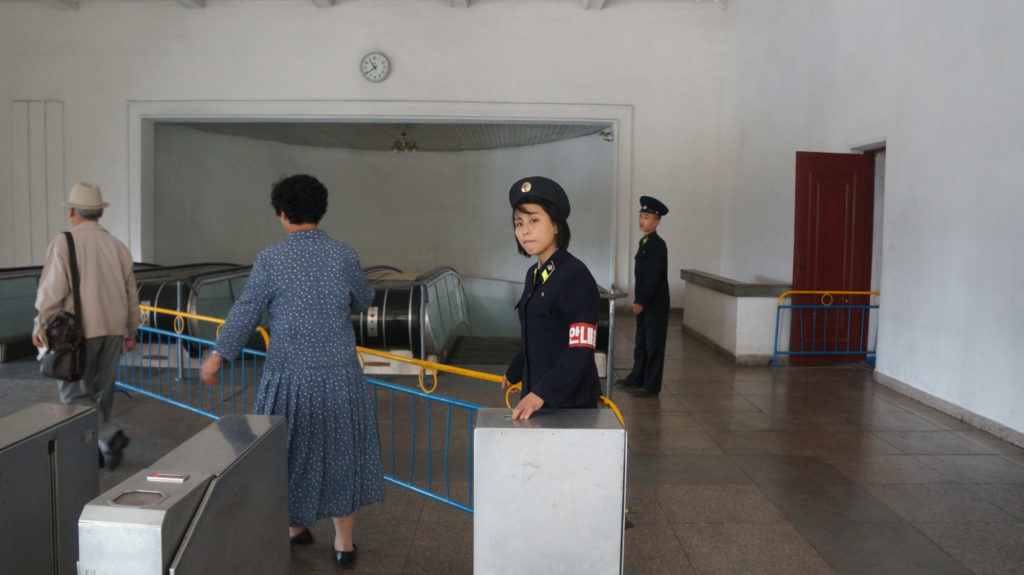 We enter through the turnstiles and descend 110 meters underground to the Pyongyang Metro. It costs 5 won to get in — less than 1 US cent — and you can pretty much ride all day during hours of operation 6am to 9:30pm. The Pyongyang Metro started its operations in 1973. Line 1 and Line 2 connect at Victory 전승 and Comrade 전우 stations. What makes the Pyongyang metro unique is that each station has its own revolutionary theme such that one does not need to go to a history museum to learn about the country. You can simply travel through the subway to understand what the country stands for.

So, we start from Prosperity Station 부흥역, the first stop on Line 1. This is the stop that most tourists see. It’s definitely one of the larger stations, hence prosperity. Trains run every 3 to 5 minutes and I’m told there are 500,000 riders per day on average. 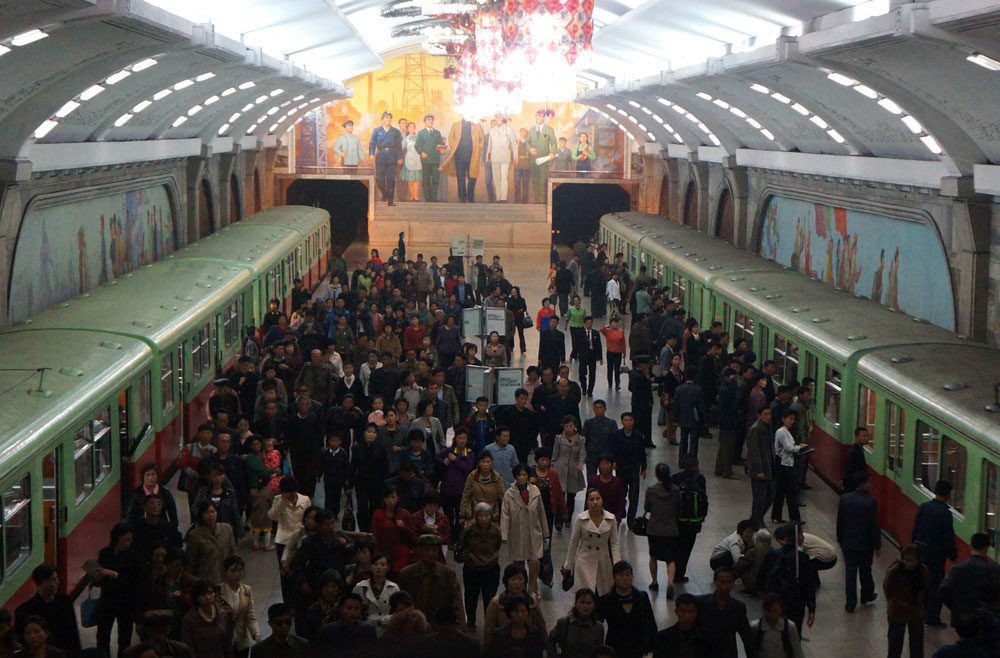 Glory Station 영광
The chandeliers in this station represent the fireworks that went up after the end of the Korean War. 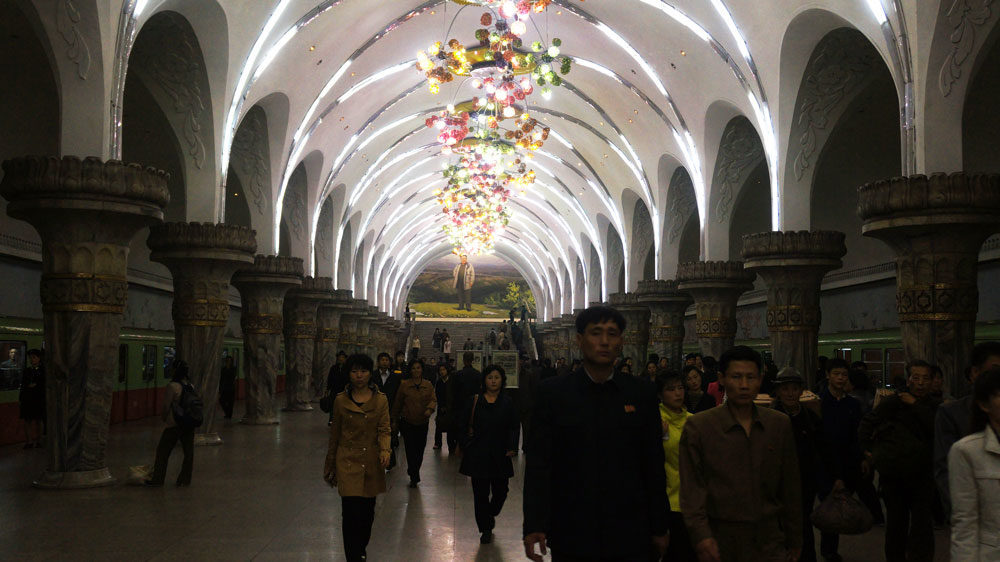 Torch Station 봉화
The publications posted in all of the stations are the Rodong Sinmun, the official Worker’s Party Newspaper (로동신문), the Sports Newspaper (체육신문), the Pyongyang Newspaper (평양신문) and occasionally the Culture Newspaper (문악신문). 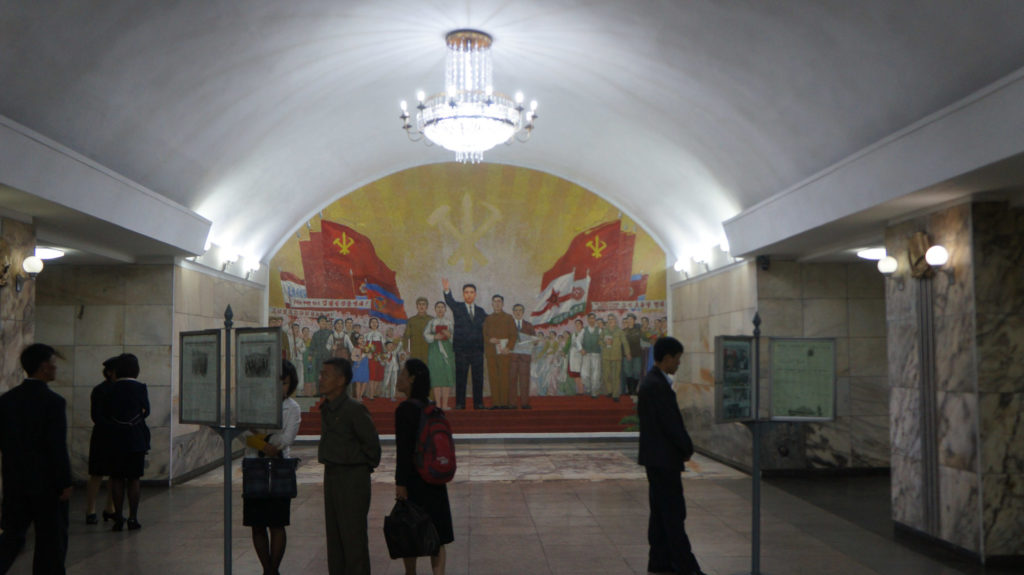 Victory Station 승리
The North Koreans regard themselves the victors of the Korean War. 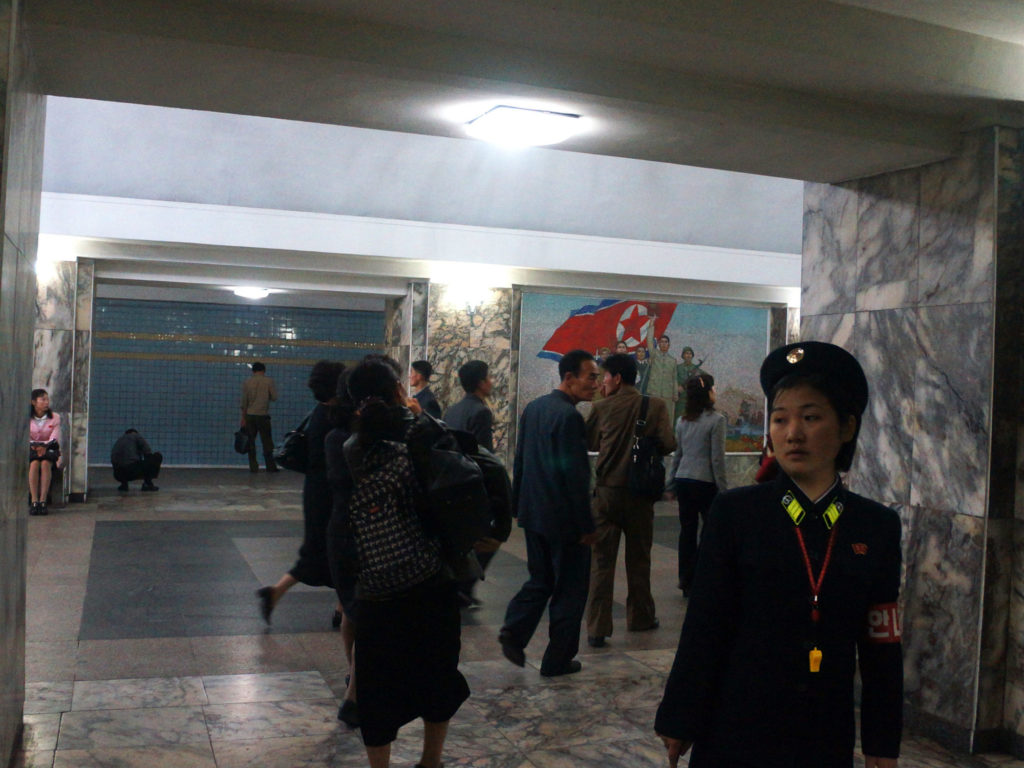 Reunification Station 통일 is characterized by its bronze paintings of the North on one side of the station and the South on the other. 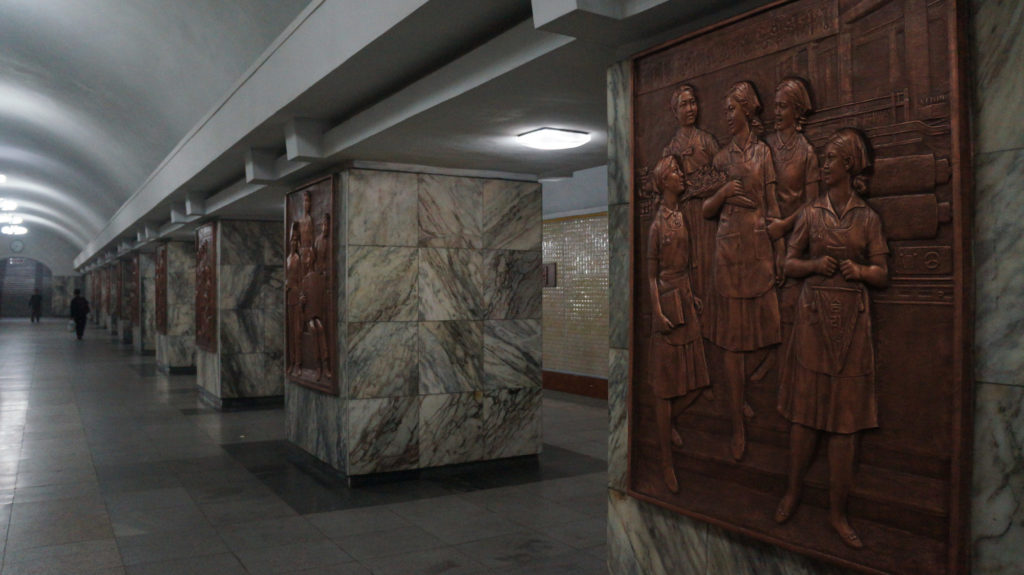 Improvement Station 개선
This station is appropriately undergoing “improvement”, expected to re-open in November. But this is what it usually looks like: 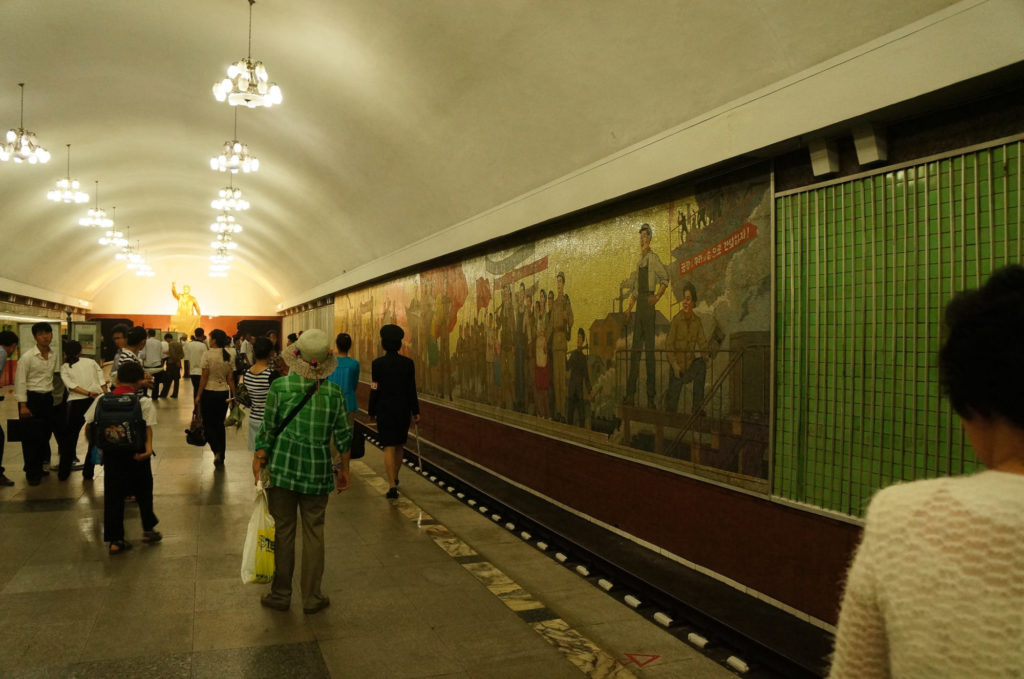 Comrade Station 전우
Camaraderie is a strong concept in the DPRK. It’s very common to address someone as comrade even in modern day interactions. 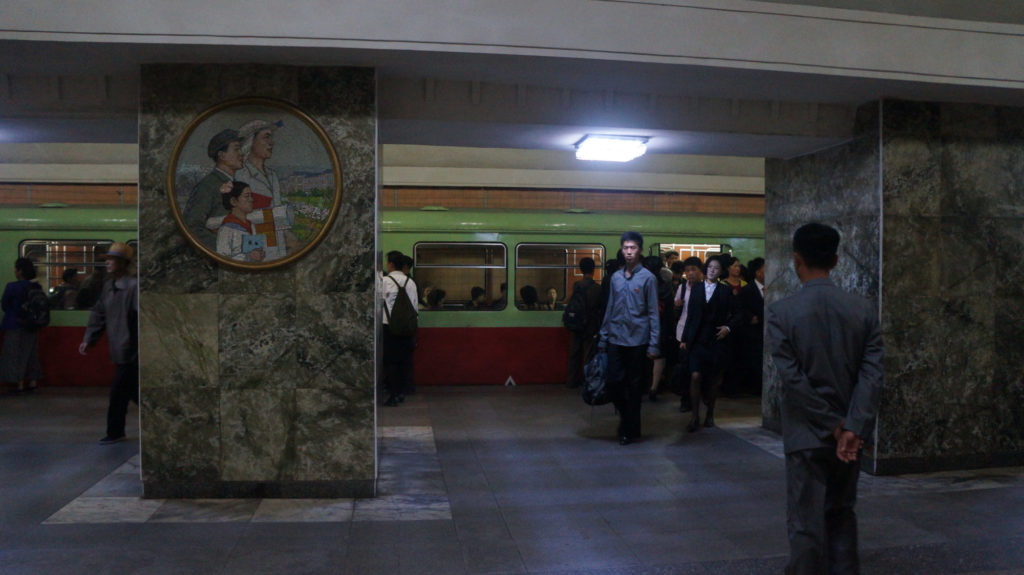 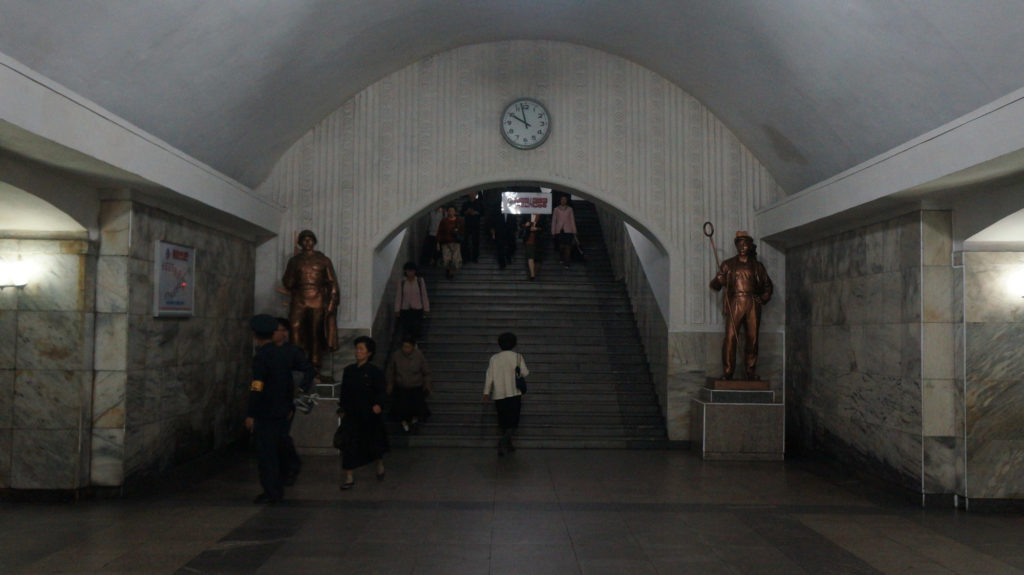 Restoration Station 광복
Restoring the nation after the Korean War. 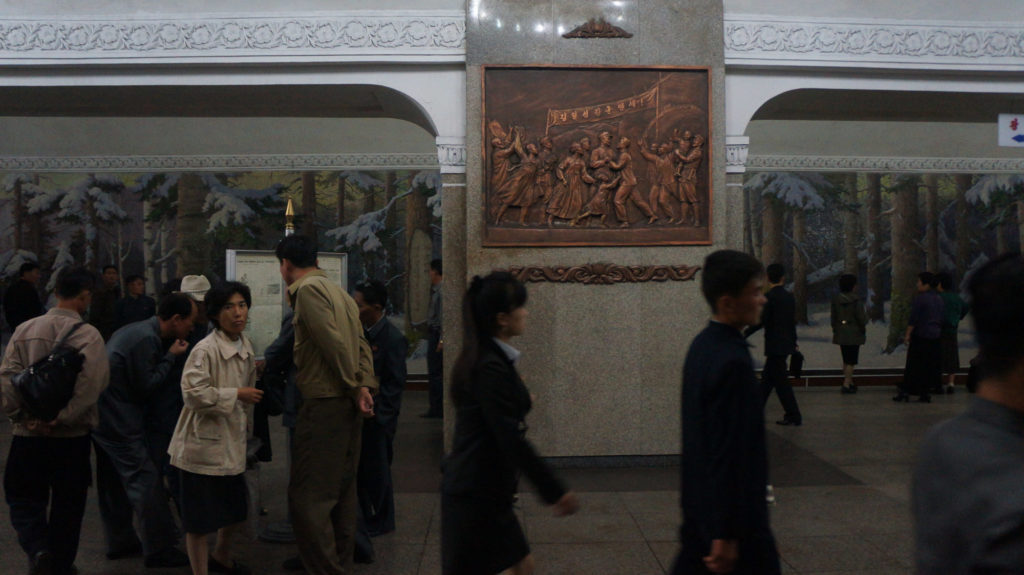 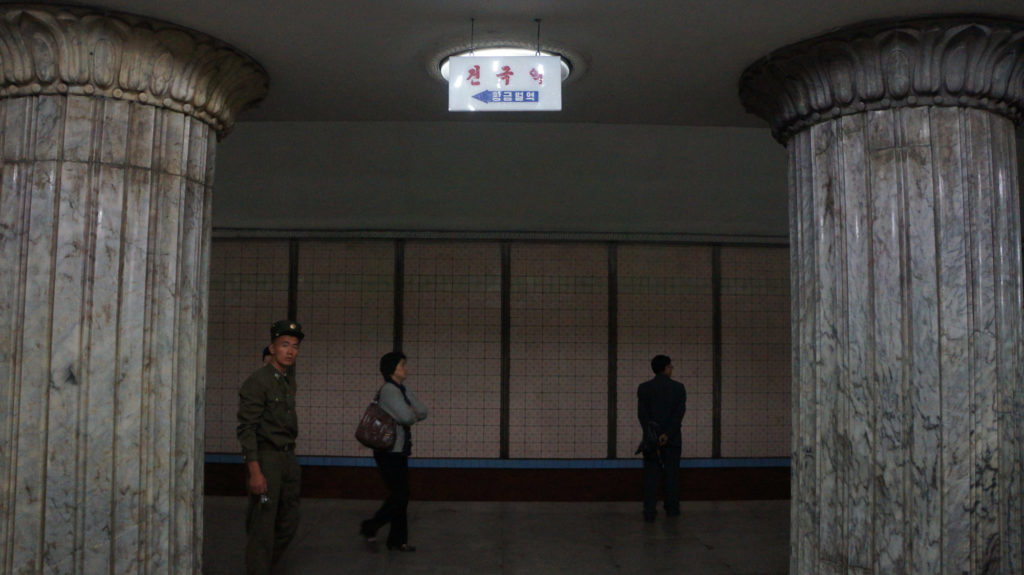 Golden Fields Station 황금벌
Fields of wheat and chandeliers in the shape of grapes signify agriculture. 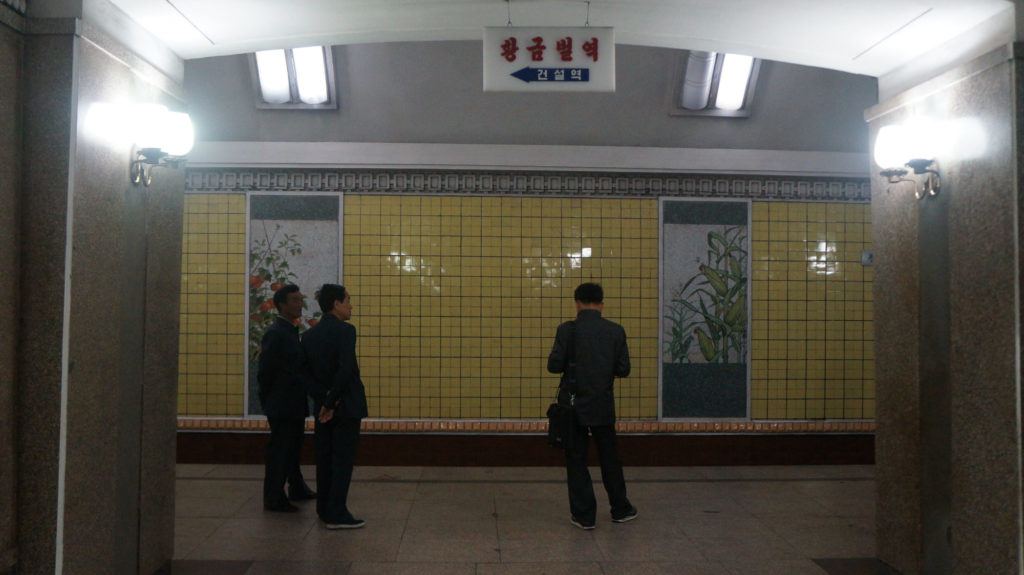 Renovation Station 건설
My favorite station. You can cross to the other side by using the staircases that arch the tunnel while enjoying the mosaics depicting the construction of the railway and metro. 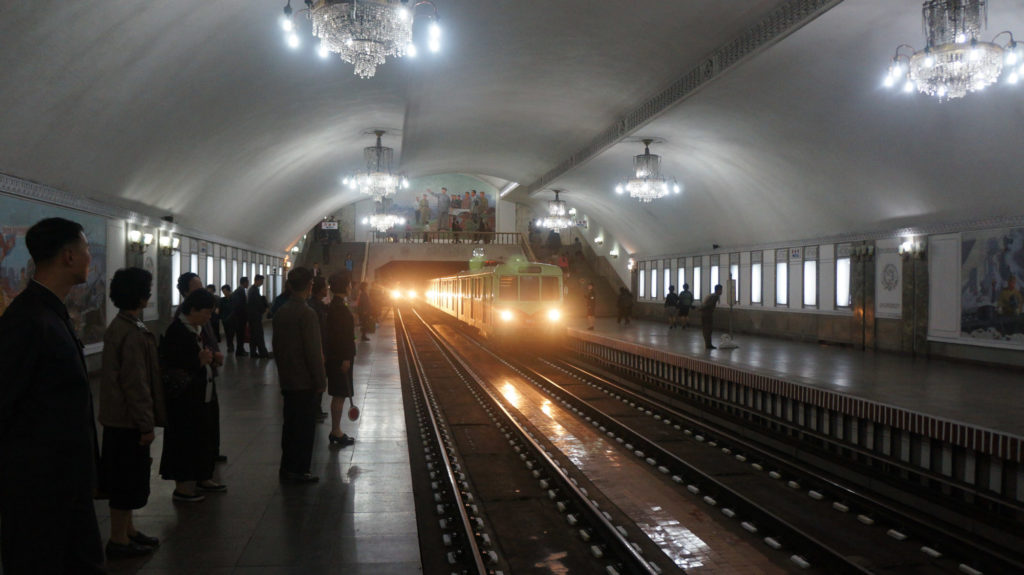 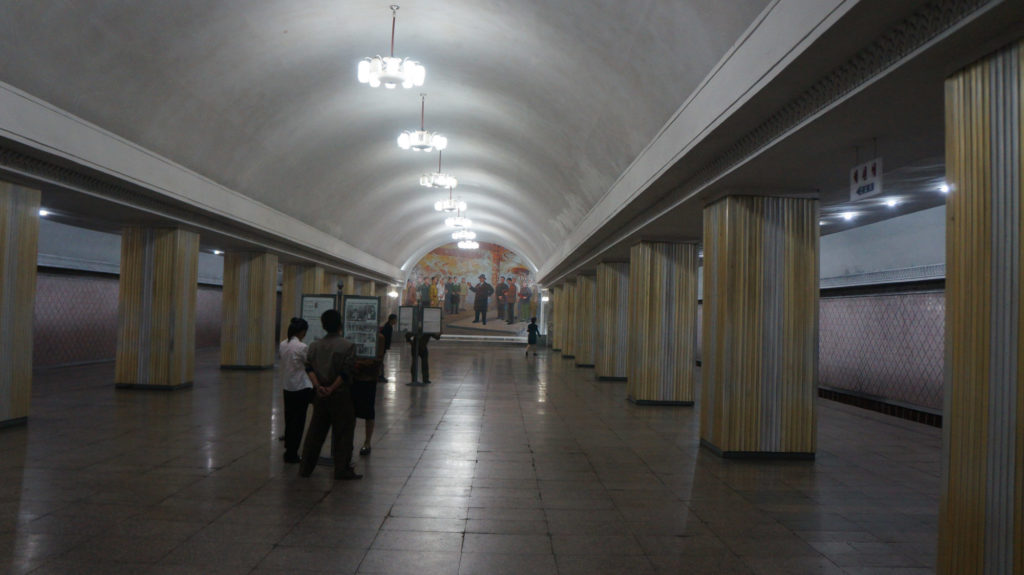 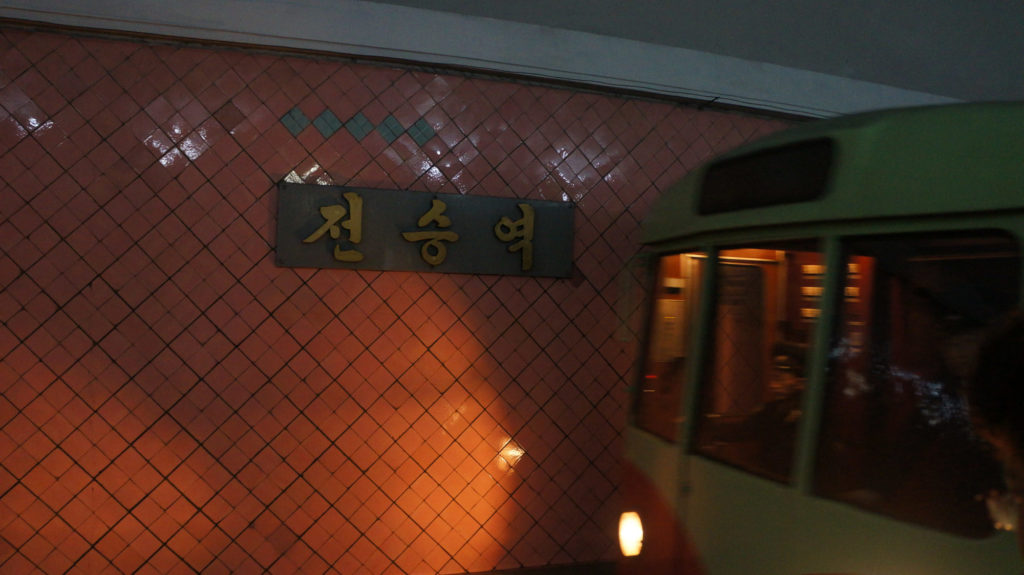 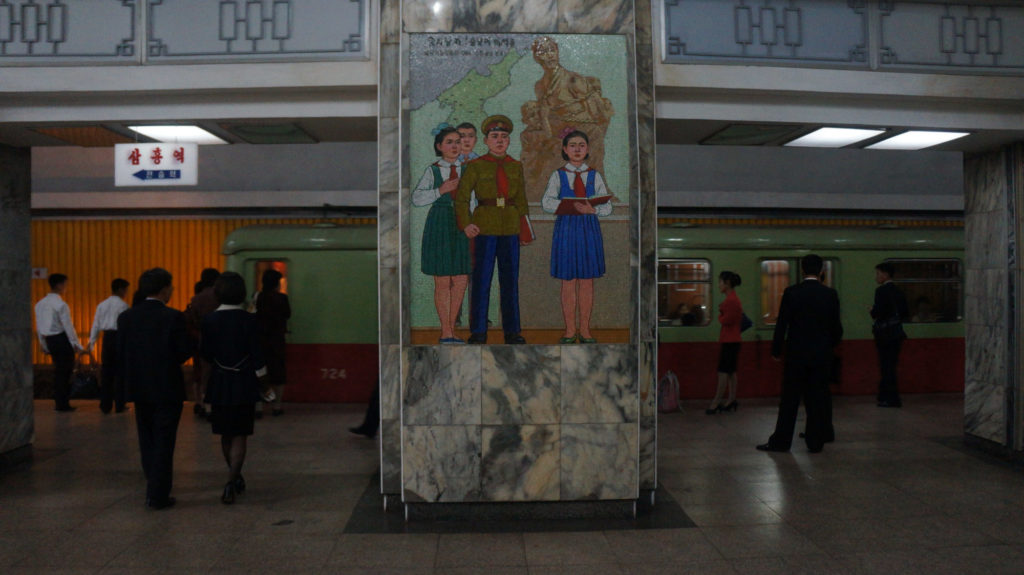 Paradise 락원 is where our tour ends. You can check out the full set of Pyongyang metro pictures on our Flickr page and be sure to check out our 2014-2015 North Korea tour offerings to ride the Pyongyang metro for yourself.