What Currency Does North Korea Use?

During your visit to North Korea, you’ll need to pay for incidentals such as souvenirs, extra snacks or drinks, laundry or international phone calls. What currency does North Korea use and how do you pay?

What currency does North Korea use?

Can I use the local North Korean Won?

Yes and no. Technically, it’s not permitted for tourists to use the North Korean Won and typically you won’t handle or use local currency during your visit to North Korea. However, there are exceptions and on most of our group tours, we visit the Kwangbok Department Store in Pyongyang where you’ll have the opportunity to exchange into North Korean Won and make purchases within the store. 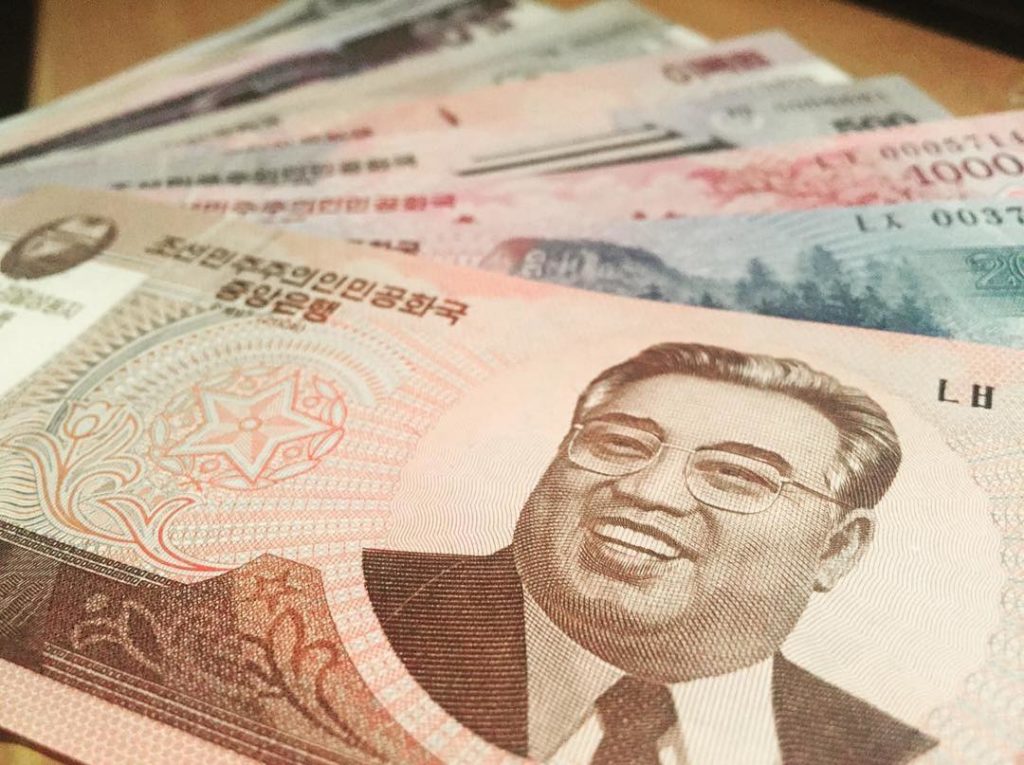 Where can I get North Korean Won?

There are just two places in Pyongyang where tourists are permitted to exchange and use the local North Korean Won: Kwangbok Department Store and Daesong Department Store. These multi-story shopping complexes include a grocery store, clothing and apparel, electronics and whitegoods departments and a food court. They’re always buzzing with Pyongyang’s residents stocking up on the assorted local and imported product. Money exchange counters are available inside to buy and sell the Chinese Renminbi (RMB), United States Dollar (USD) and the Euro (EUR) against the local North Korean Won (KPW) at market exchange rates.

If you’re visiting the Rason Special Economic Zone in the remote northeast, North Korean Won can be acquired at the Golden Triangle Bank in Rajin, along with pre-loaded debit cards for use within Rason. North Korean Won can be spent at Rajin Market, the only free market accessible to tourists in North Korea, where you can engage in trade with the locals for anything but hen’s teeth!

Can I take North Korean Won out as a souvenir?

North Korean Won is a closed currency and unfortunately, we must advise that North Korea does not permit it to be taken out of the country. However, it’s possible to purchase souvenir collections of the previous issue currency which includes full sets of uncirculated banknotes and coins.

If tourists can’t use North Korean Won, how do we pay in North Korea?

Foreign currency in cash will be your primary means of payment for souvenirs, optional entry fees and daily purchases during your visit to North Korea. The Chinese Renminbi (RMB), United States Dollar (USD) and Euro (EUR) are widely accepted and interchangeable, with cashiers doing the conversion when required. Each currency has its advantages and disadvantages, for convenience it’s best to bring a variety of each in low denomination notes.

The Chinese Renminbi (RMB) is the most flexible currency for tourists as the banknote denominations are small (max 100 RMB) and change is plentiful due in part to the high volume of Chinese tourists visiting North Korea. RMB is conveniently accessible as you’ll be passing through China en route to North Korea in most cases. If you’re traveling to a border zone in North Korea such as Sinuiju or Rason, RMB may be the only readily accepted foreign currency.

The Euro (EUR) is North Korea’s ‘default’ foreign currency and is the ideal currency for souvenir purchases and optional entry fees such as performance tickets. Most souvenirs are ticketed in EUR and although they can always be converted into RMB or USD, it’s best to pay in the ticketed currency for the best rate. No conversion will be required when paying entry fees with EUR, and prices typically reflect an exact banknote, 5 EUR or 20 EUR for example. EUR isn’t convenient for small purchases as the lowest note denomination is 5 EUR, however, 1 and 2 EUR coins can fill this void.

The United States Dollar (USD) is especially useful for incidentals such as snacks, drinks and small souvenirs such as postcards, stamps, newspapers or pins. If possible, we recommend bringing a stack of 1 USD bills, however, the major problem with USD is ripped, worn or marked notes. Damaged bills won’t be accepted and this is exceptionally strict with USD. Additionally, notes need to be of recent issue.

Importantly, don’t bring large notes (50/100 USD or EUR) as they’ll be difficult, if not impossible to break. Even for small purchases, you’ll often receive a mixture of currencies in change and if they’re out, perhaps some bubble gum, water or a stamp to make up the weight!

For foreigners, North Korea is entirely a cash economy. Foreign credit cards are not accepted and there are no ATMs for you to withdraw money. You cannot send money to North Korea, traveler’s cheques are not accepted and no online payment options are available. This means that all spending money must be carried with you into the country. We strongly recommend all travelers to bring more cash than they anticipate to spend as if you run out there are truly no options, you’ll be borrowing from fellow travelers!

While payment options within North Korea are limited, the options for booking your tour to North Korea with us certainly are not! We accept credit cards, international wire transfer, WeChat Pay and even Bitcoin. Take a look at our scheduled group tours and our tailored private tours to North Korea.

Want to see all of North Korea’s banknotes? Check out our blog post exploring the current circulation North Korean Won banknotes and what they tell us about the country!

Be the first to leave a comment for What Currency Does North Korea Use?