The 105-story Ryugyong Hotel in Pyongyang is North Korea’s tallest building (330m/1080ft), and a marvel of the capital’s progressively modern skyline. Ryugyong means ‘capital of willows’.

Construction began on the Ryugyong Hotel back in 1987, and as of 2020 it remains incomplete and closed to the public. The project has been halted and resumed multiple times over the decades and it’s progress and the date of a grand opening have been consistently shrouded in speculation.

The Ryugyong Hotel is recognized by the Guinness World Records as the tallest unoccupied building.

When will the Ryugyong Hotel open? 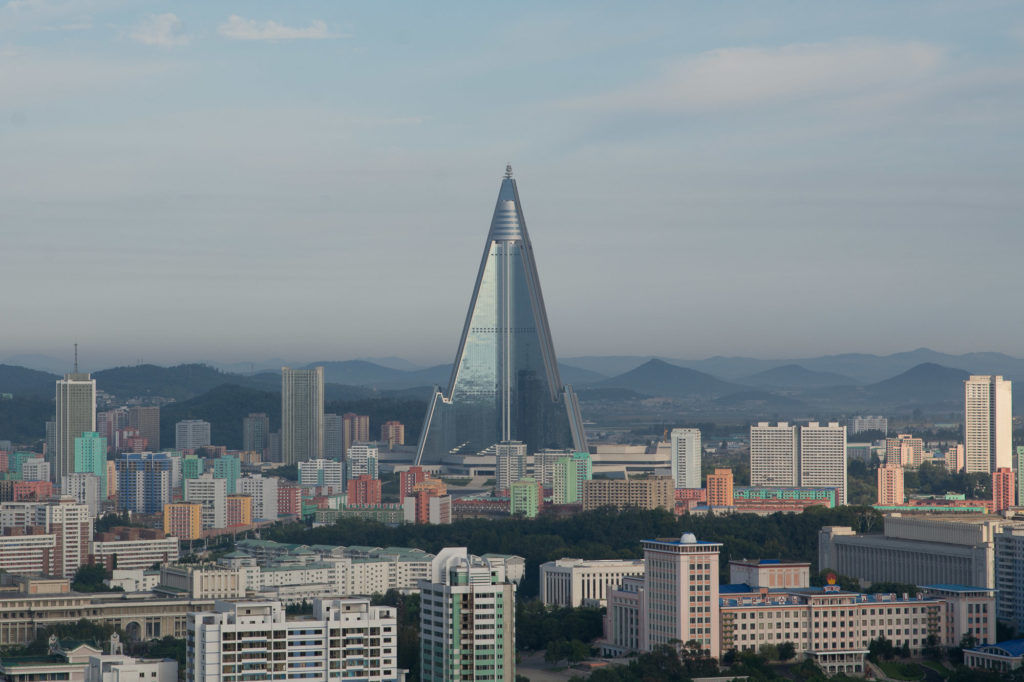 The million-dollar question! It’s currently unknown when the Ryugyong Hotel will open for service or what it’ll look like inside when it does.

Originally scheduled to open in 1989 for the 13th World Festival of Youth and Students, this deadline passed and construction on the Ryugyong Hotel ceased in 1992. The structure sat as a seemingly abandoned concrete husk until 2008 when progress suddenly resumed with a focus on glazing the exterior with a glass veneer.

The exterior was completed in 2011, and an opening date of 2012 was targetted to commemorate the centenary anniversary of Kim Il Sung’s birth. However, this was pushed back to 2013 and there hasn’t been any official projection since. The interior remains unfurnished.

Has there been recent progress on the Ryugyong Hotel? 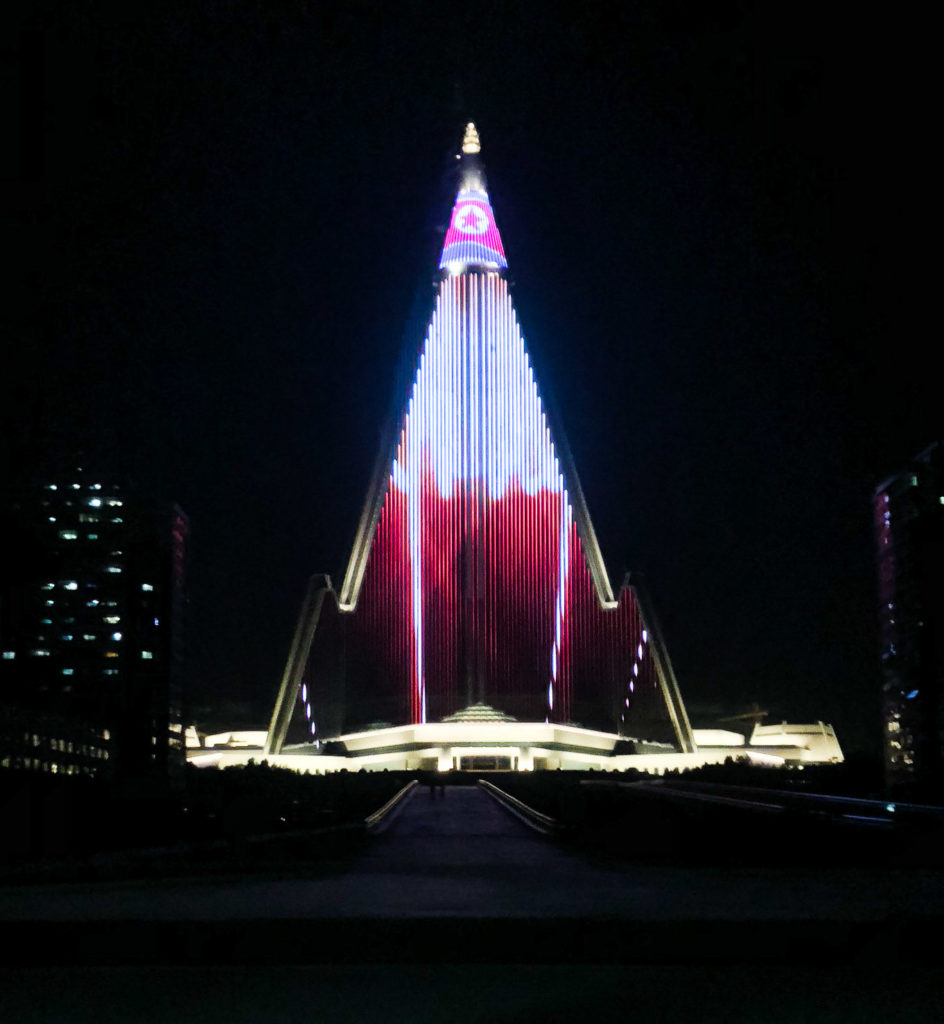 After construction ceased in 2011, there wasn’t much activity at the Ryugyong Hotel until 2017.

In August 2017, the entrance barrier was removed which unofficially unveiled a drop-off loop and the entrance to the hotel. This fueled some (very optimistic) rumours of an upcoming partial opening, perhaps of the first 20 floors.

In April 2018, decorative LED illumination was added to the outer walls of the hotel, which turned the entire structure into an animated screen of patriotic scenes and iconography. This lighting has transformed the Ryugyong Hotel into an incredible sight after dark!

What’s expected to be inside the Ryugyong Hotel?

The Ryugyong Hotel is expected to have at least 3000 rooms for guests, but it’s intended to be far more than a hotel. The rumored plan is to include office space, leisure centers, department stores, and restaurants, including two revolving restaurants with panoramic views; the kind of upmarket facilities you’d sooner expect in a Dubai megastructure.

Can I visit the Ryugyong Hotel on a tour?

Unfortunately, tourists can’t visit the Ryugyong Hotel yet. Neither can anyone else under normal circumstances as it’s still a construction site. Never fear, as the towering building is always in view across Pyongyang. On a tour, you won’t miss a snap of the exterior and we know some particularly good vantage points!

Where’s the best place to take a photo of the Ryugyong Hotel? 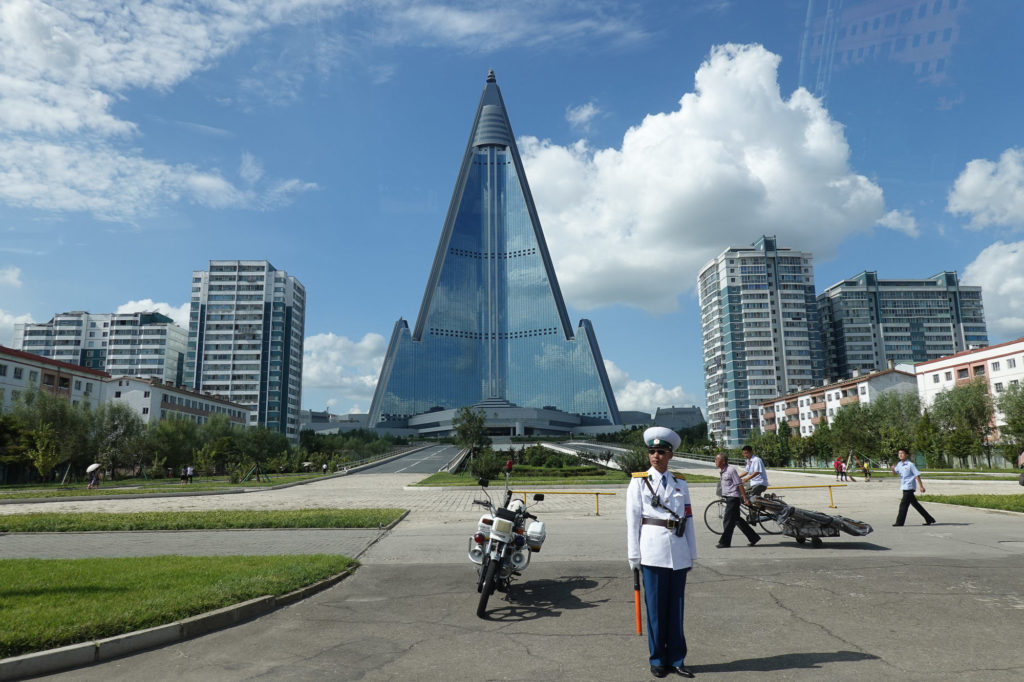 Great views of the Ryugyong Hotel are had from the nearby Victorious Fatherland Liberation War Museum, which is a fixture on most Pyongyang itineraries. However, the closest view you’ll get is from the Pyongyang Embroidery Institute situated at its base, you may need a wide-angle lens to frame it fully!

Our favourite spot is after crossing the Potong Bridge, where you’ll get a centered view of the Ryugyong Hotel entrance. This is ideal for night shots of its illuminated exterior.

For cityscape views that put the sheer scale of the Ryugyong Hotel into perspective, photos taken from the Juche Tower or the Arch of Triumph are spectacular.

Does the futuristic architecture of the Ryugyong Hotel fit Pyongyang? 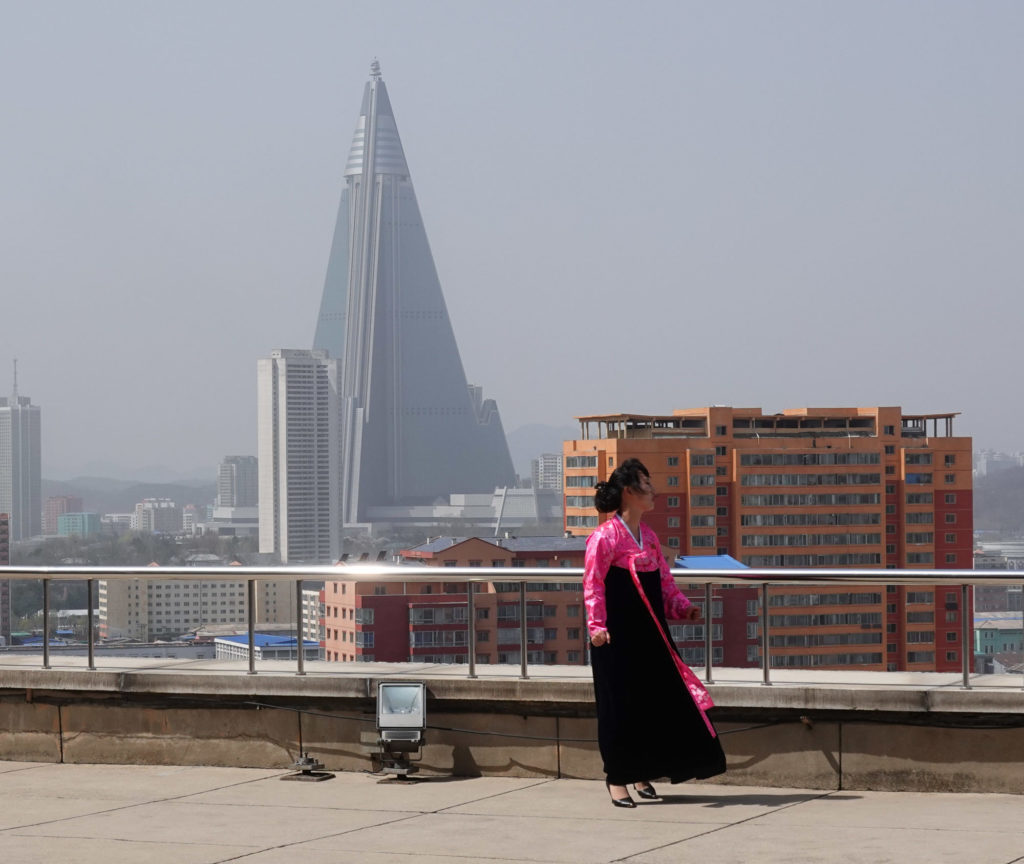 No doubt, the Ryugyong Hotel’s futuristic pyramid-rocket ship design is a unique one. However, it doesn’t look out of place in 2020 Pyongyang. Major developments have modernized Pyongyang, most notably with the contemporary high-rises built on Changjon Street, Mirae Scientists Street, and Ryomyong Street which opened in 2012, 2015, and 2017 respectively. The capital now looks a whole lot different than a decade ago!

Will Uri Tours stay at the Ryugyong Hotel?

Once (if!) the Ryugyong Hotel eventually opens, it will certainly be an option on our tours. Watch this space, and follow us on Facebook or Instagram for the latest!