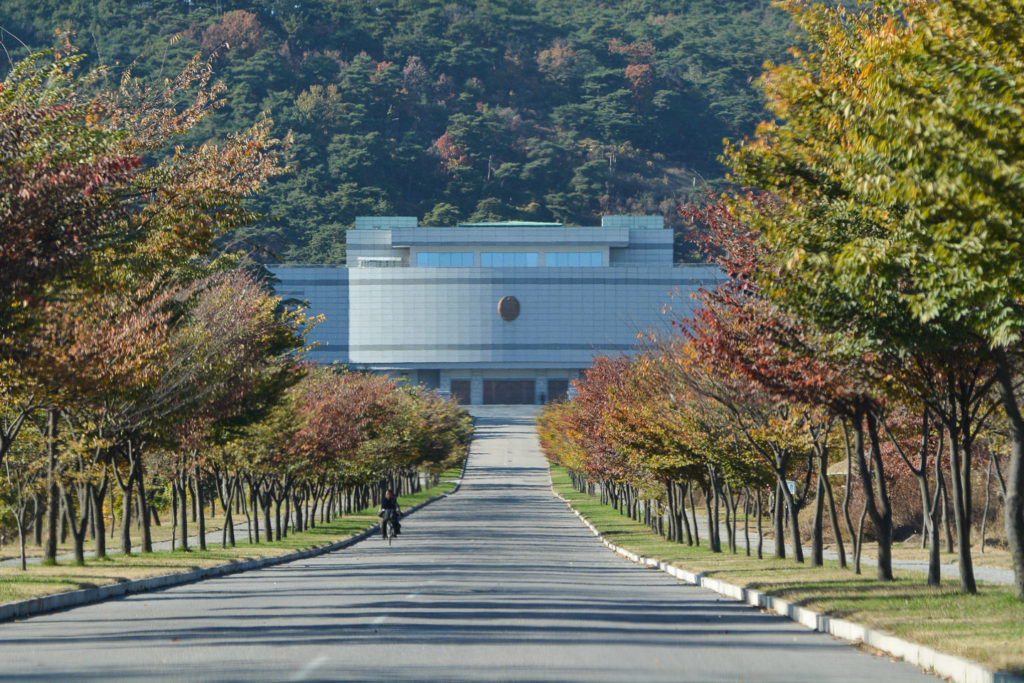 Inaugurated in August 2012, the National Gifts Exhibition House is not to be confused with the International Friendship Exhibition located in Mt. Myohyang, a similar (and more extensive) display of gifts presented by non-Korean foreigners, primarily dignitaries.

While the structure itself is an unembellished concrete block of brutalist architecture that’s devoid of windows, the interior is lavish and characterised by wide, tall hallways of shined marble tiling and grand wooden doorways leading into rooms of gifts showcased within well-lit glass cabinets and roped-off raised platforms.

There are over 8900 gifts to explore across 20 rooms spanning three stories. Each gift ranges from the practical to the eccentric to the quirky, and all are meticulously curated and sectioned by the recipient. The contributor name and the date of receipt are displayed on a placard beside, information seemingly a mere formality for the site guides who know the hall’s inventory like the back of their hands!

Photography is not permitted inside the museum, and all visitors will be subject to metal detection screening on entry to the building.

What kind of gifts are within?

You can expect the unexpected! Fine woodwork, antique pottery, and paintings can be found beside household electronics, preserved ginseng specimens, and luxury cars. There’s no shortage of the peculiar, with items such as a stuffed pufferfish ashtray, a bed made of non-conductive emerald tiles, and a chair crafted entirely out of deer antlers.

Further examples of gifts presented are listed below:

Visiting On Our Tours

The National Gifts Exhibition House is rarely visited by foreigners as it’s typically overlooked in preference to the International Friendship Exhibition in Mt. Myohyang. A major drawcard to the latter is browsing gifts from recognizable foreign names, or from your home country, which is missed on the visit to the former unless you’re of Korean heritage. As such, you won’t find the National Gifts Exhibition House on many group tours, but visits can easily be arranged on private tours. The hall is open all year round but closed on Sundays and on public holidays. You can expect to spend between 1-2 hours inside.

It’s most efficient to combine this visit with activities such as a picnic lunch on Mt. Ryongak, a stroll to Mangyongdae Native House, shopping at Kwangbok Department Store, a performance a the Pyongyang Circus, and/or a tour of the Mangyongdae Schoolchildren’s Palace, all located in proximity.

Alternatively, it’s convenient to visit the National Gifts Exhibition House as you travel between the west coast city of Nampo along the Youth Hero Motorway.

If you’d like to peruse this exhibition in Pyongyang, we can arrange it. Contact us for more information!