Join us in Pyongyang for the 2023/24 countdown on this extended tour of North Korea for New Year’s Eve and beyond! This special tour will see you on Kim Il Sung Square alongside thousands of locals for New Year festivities, which in past years has included a music performance of North Korea’s famous Moranbong Band, a light show, a synchronized drone display, and a massive fireworks spectacle over the Taedong River! You’ll visit North Korea’s major must-see sights, from the sacred Kumsusan Palace of the Sun in Pyongyang to the iconic DMZ at Kaesong!

At 11:30am, meet us inside Terminal 2 of the Beijing Capital International Airport to check in for our scheduled departure of 02:00pm. We will hand out your DPRK visas at this time. Timings to be confirmed.

We’ll begin the day with a tour of the Victorious Fatherland Liberation War Museum, an elaborate museum depicting the Korean people’s fight against foreign invaders. We’ll have a guided tour of the war remnants, exhibits, and dioramas and learn about the Korean war from the North Korean perspective. We’ll also board the USS Pueblo, the “American Spy Ship” captured in 1968. We’ll have lunch at Okrgyu Restaurant, founded in 1960 this is Pyongyang’s most famous restaurant!

Line up your sights and show off your skills at the Meari Shooting Range, where you can fire a pistol, rifle, or try your hand at archery. We’ll then catch an afternoon performance of the incredible Pyongyang Theatre, particularly popular on public holidays!

Continue the festivities into the evening as we visit the Rakwon Beer House to taste the craft beers. This is one of the pioneering establishments of the microbrewery craze in Pyongyang.

This morning, we’ll take a look at the Korea Film Studio, North Korea’s very own Hollywood, the studio behind a plethora of domestic films. We’ll tour the post-production complex and film sets here.

Visit the Revolutionary Martyrs’ Cemetery on Mt. Taesong. This hill-top memorial is where decorated figures of the struggle for Korea’s liberation are buried in Pyongyang. Each grave features an individually sculptured bronze bust of the fallen.

After lunch, we’ll stop at the Arch of Reunification, a massive monument spanning both sides of the motorway.

Continue our journey on the Reunification Highway south toward the city of Kaesong where we’ll spend overnight. Kaesong is a historic city just shy of the DMZ and the only city that changed hands between North and South during the Korean war.

Overnight at the Chanamsan Hotel

Begin the day with a walk through Kaesong city where we’ll pass the South Gate en route to Janam Hill. At the peak, visit the grand monuments of the Great Leaders before getting a breathtaking view over the Kaesong Old Town. Kaesong was left largely untouched during the Korean War and its traditional dwellings still stand.

We will head for the DMZ where we’ll hear from our military guides a perspective of the Korean War that often gets discredited or unheard. At the DMZ, explore Panmunjom, shake hands at the exact place that the Armistice Agreement was signed between UN forces and the DPRK, and wave hello to the South at the blue houses in the Joint Security Area.

Head to the Koryo History Museum, a UNESCO site, to learn about the Koryo Dynasty (where the name Korea originates). You’ll also have a chance to pick from the most varied range of postcards in the country at the Koryo Stamp Shop. Stop at the original Sonjuk Bridge, a UNESCO site. 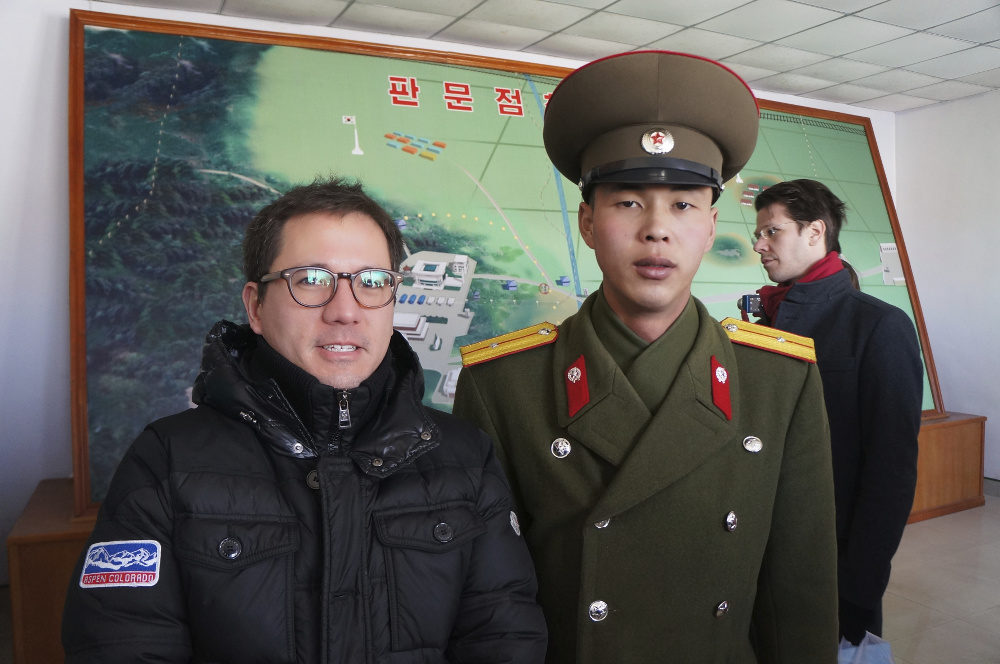 On return to Pyongyang, visit the Grand People’s Study House, North Korea’s national library and the heart of study on the revolutionary Juche ideology. Check out the local intranet, visit the music appreciation room and flick through a handful of the up-to 30 million books said to be available here!

Option 1 (Included & Recommended): Morning departure to Dandong via international train. We will depart Pyongyang Railway Station approximately 10am. You will arrive into Dandong approximately 16:30 and be clear of immigration/customs by approximately 1730, please allow considerable time for onwards connections.

It’s possible to connect by train onwards from Dandong to Beijing at extra cost. We can arrange this as part of your tour package, simply let us know.

Option 2 (+130 EUR): Morning departure to Beijing via Air Koryo flight. Estimated time of arrival is 09:50am local time, although flight times are subject to final confirmation. Please reserve connecting flights departing after 14:00pm local time, to allow sufficient time for immigration/customs clearance, baggage claim and re-check-in. Timings to be confirmed. Important: Although this Air Koryo flight is scheduled, it has historically been subject to cancellation by the airline. As such, we strongly recommend all travellers opt for the train (Option 1) instead, or leave this possibility open in the event of flight cancellation.