In this comprehensive special tour of North Korea, be there during May Day (International Workers’ Day) festivities including a mass dance and witness absolutely everything from the political sites of Pyongyang to the historical city of Kaesong, the serenity of Mt. Myohyang, right over to the east-coast port city of Wonsan and even Pyongsong, often referred to as North Korea’s ‘Silicon Valley’. This will be one life-changing week sure to satisfy the curiosity you have in this fascinating country!

On our return to Pyongyang, stop at the Arch of Reunification, a massive monument spanning both sides of the motorway.

After lunch, tour the Mansudae Art Studio, the most prestigious fine arts studio and gallery in North Korea, the only studio given permission to depict the Great Leaders in monuments, murals and mosaics.

Stroll through a park to the Mangyongdae Native House, a modest straw-thatched house in a serene park setting which is the birthplace of President Kim Il Sung. Take a look through Kwangbok Department Store, a five-story department complex filled with local and imported products. It’s one of only two places in Pyongyang where tourists can exchange and use the local North Korean Won.

We’ll visit the Tower of the Juche Idea to learn about North Korea’s national ideology, the Juche philosophy, and take the lift 150-meters to the top for the best views in Pyongyang city! Visit the Party Foundation Monument, built to commemorate the 50th anniversary of the foundation of the Workers’ Party of Korea, recognizable by the communist hammer and sickle but with an added North Korean twist.

Our first stop will be the Mansudae Grand Monument, an important site famous for its large, bronze statues of President Kim Il Sung and Chairman Kim Jong Il. It is customary to visit the monument on important holidays to bow and lay flowers. Today is May Day, and we expect to see join large numbers of locals here!

Visit the Mansudae Fountain Park, a serene meeting spot for students in their free time and an often used backdrop for wedding photos.

We’ll then visit Pyongyang’s central square, Kim Il Sung Square, home to many of North Korea’s military parades broad internationally. Take a city walk with a stop at the Foreign Languages Bookshop, the best chance in the DPRK to pick up souvenirs such as books, stamps, DVD/CDs and posters.

We’ll then head to Mt. Taesong, where every year on May Day there are folk activities such as music performances, sports, and games enjoyed by families on their day off. This is a great chance to interact and a lot of fun!

Enjoy lunch at the Okryu Restaurant on the banks of the Taedong River, where the specialty is Pyongyang Cold Noodles, the most famous dish in North Korea.

After lunch, visit Moran Hill, a central park buzzing with festivities as locals celebrate May Day over a picnic with music and dancing, a great opportunity to join the fun!

We’ll then visit the Kaeson Youth Amusement Park, where the thrill-seekers among us can brave the rides with Pyongyang locals on a night out!

This morning we’ll drive the city of Pyongsong. Pyongsong is often referred to as the ‘Silicon Valley’ of North Korea due to its role as a major hub for science and technology research.

We’ll first visit Konji-Ri Revolutionary Site, a covert site hidden in the hills that was once the headquarters to the Korean People’s Army during the Korean War. 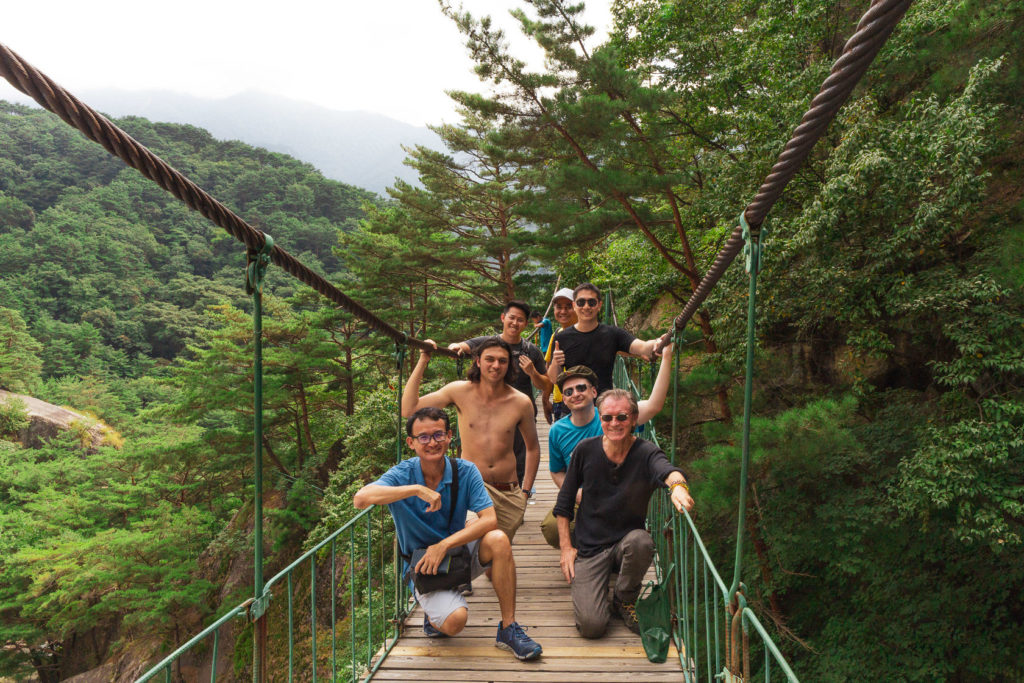 After lunch, we’ll drive onwards to Mt. Myohyang, one of North Korea’s most celebrated mountains.

we’ll join the scenery as we hike the Manphok Valley trail, an area popular with picnicking locals and filled with dense forest, waterfalls and temples with great views. Bring comfortable shoes. All hiking is optional and at your own pace. Manphok Valley is a return route, there’s no obligation to reach the peak. Views are beautiful throughout!

After lunch, we’ll return to Pyongyang and visit the Mangyongdae Schoolchildren’s Palace, a massive extracurricular facility for young students to further their talents in arts, technical skills, and sports.

DAY 7 – MASIKRYONG AND RETURN TO PYONGYANG

Grab your luggage and head to the airport for an evening flight back to Shanghai. Approximate time of departure is 7:55pm from Pyongyang with arrival at Shanghai Pudong International Airport at 9:35pm. Please reserve connecting flights departing after 01:30am local time (+1 day), to allow sufficient time for immigration/customs clearance, baggage claim and re-check-in. Timings to be confirmed.

Be the first to review “The Absolute DPRK – May Day Special – Shanghai OR Beijing Departure – 6.5 Nights” Cancel reply